The beginning of the crazy season. I am trying to be calm and organized, which is such a struggle for me— the organized part. I never developed the habit of list-making. I think that would help. I seem to have gotten myself involved in so many things that require many hours on the computer and/or returning things or mailing things to various locations. After I finish up what I have promised, can I resign from some of this? I hope so. I feel a New Year's resolution coming on...

Thanksgiving, the day, was lovely. My daughter hosted the festivities, so we had a quiet day that did not involve cleaning and table-setting and managing refrigerator real estate. I needed only to cook my contributions to the dinner and get myself and food into the car for the 5-minute drive to Emily's! Mid- day, between cooking tasks, Ray and I went for a nice walk in the forested area not far from our house. The day was sunny and warm enough and the yellow leaves were like bursts of sunlight in the depth of the woods. 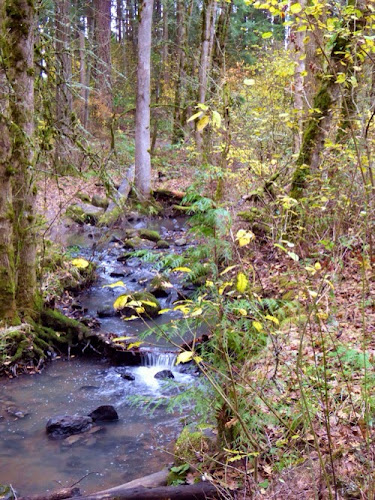 This is the same creek that runs through our yard, about a mile downstream from us. It is at least twice as wide here as at our house–more in some places. 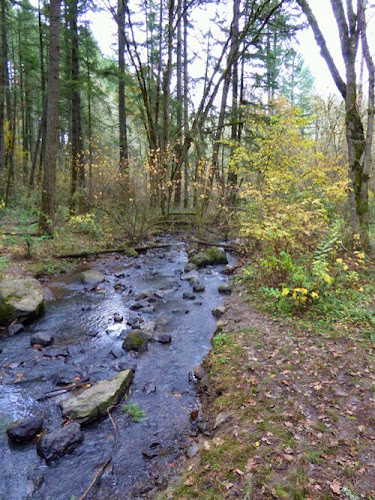 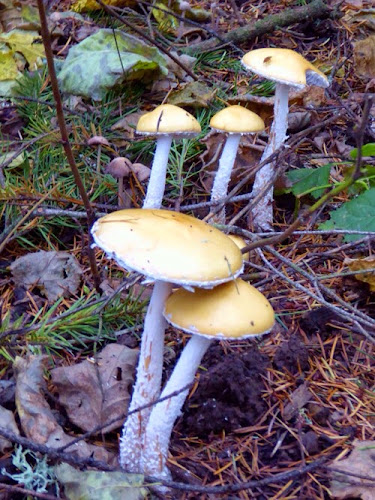 The forest is still and moist and green and fragrant with fir and earth. I can feel the tension drain away with every step. 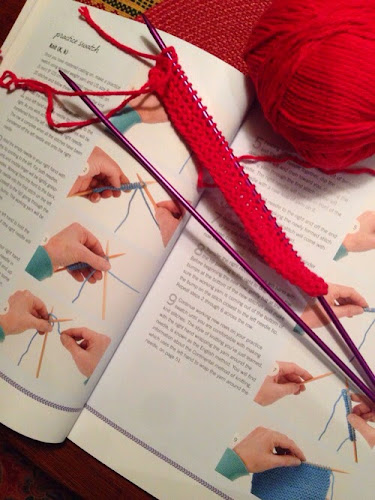 For years I resisted it, telling my knitting friends that I did not need another vice. This week I changed my mind. It seemed like something I could do, despite a bad knitting experience as a Girl Scout 60 years ago. I had forgotten everything I learned making those hideous slippers all those years ago, so I was starting from scratch. But as I got into it I think some ancient sense memory began to kick in. The rhythm of it seemed to come back to me. 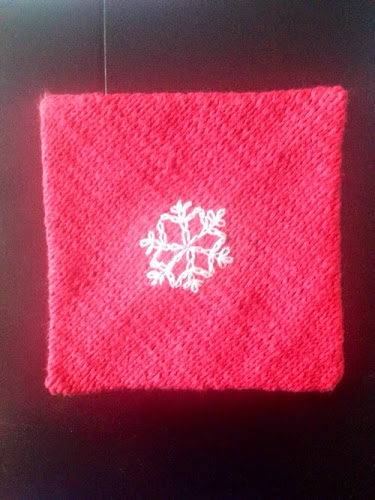 My first knitted project was this hot pad. It is not as good in person as it looks here, but not too bad. The embroidered snowflake looks really uneven, but if you tilt your head at a 45 degree angle you will see it at the angle from which I was working it. Better, right? Now I am knitting some mittens for myself. I love seeing it grow into a recognizable shape, and I love how the color changes as I knit this yarn. I would much rather be doing this than working at my computer. 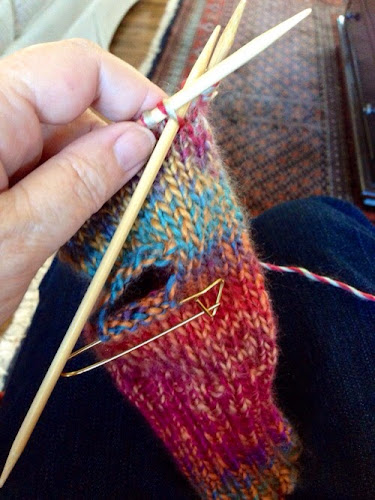 I have also started a large quilt for the High Fiber Diet Neutrals show. The actual theme is "Making our Mark". Some peeks at its beginnings. 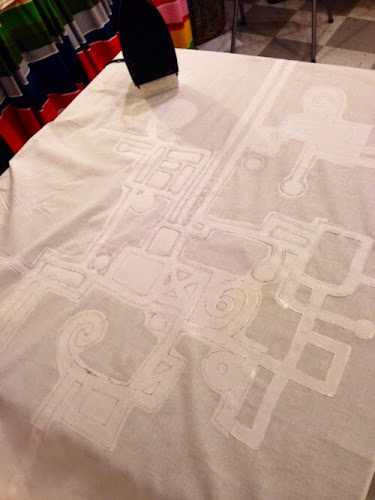 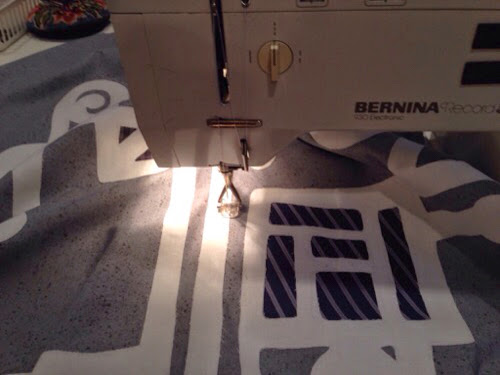 Hope you all had a lovely Thanksgiving.

PS - I found this photo online that looks like the slipper pattern we used in Girl Scouts, except that mine ended up being about 18 inches long. See why I had that 60 year antipathy for knitting? 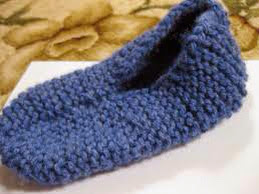 Posted with Blogsy
Posted by Terry Grant at 1:58 PM 4 comments: Links to this post

There has been a recent discussion on the Quiltart list about creating artwork from photos, both one's own and photos from other people. What started this discussion were some of the prizewinners from this year's Houston Quilt Show that were obviously copied from photos. This piece was taken very directly from Dorothea Lange's photo of the migrant mother, from the dustbowl era. The quilt artist did not violate any copyright since the photo is in the public domain, but nevertheless, many of us were surprised that it was awarded a prize in a category for original artwork. Similarly, this piece is a very faithful copy of a painting. The quilt artist obtained permission from the painter to copy the painting. Googling found the original painting and it is a detail for detail copy.  In our online discussion no one is questioning the artists' legal rights to use other artists' works as their source material, but many, including myself, are disappointed that these copies were first, accepted in categories that clearly called for original work and second, that they won awards.

Artists may, of course, do whatever the law allows them to do in regards to where they find their images, but one has to wonder why one artist chooses to copy the work of another. (and that includes someone else's photo) I find it hard to think I would get a lot of satisfaction out of that kind of work. Yes, copying of master works is a popular exercise for art students, but it is understood that this is an exercise and not your personal work.

So--what about photos? Working with photos is common in the art quilt world. Some quilt artists actually print a photo on fabric and then stitch right over it. Some painstakingly copy a beautiful photo, detail by detail. Some use a photo as a starting point and abstract and rethink the composition. For me, I use my own photos, never anyone else's, and sometimes I follow the composition fairly closely and sometimes I use only the parts I want to emphasize and that work as part of my own vision. Here are a couple of recent works, drawn from photos taken on our Spain trip. 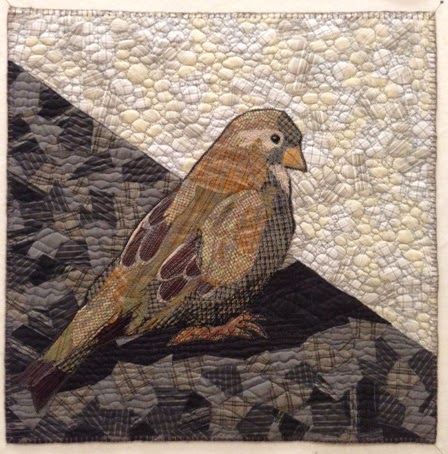 This one is a fairly straightforward interpretation of the photo I took on the steps of the Prado. 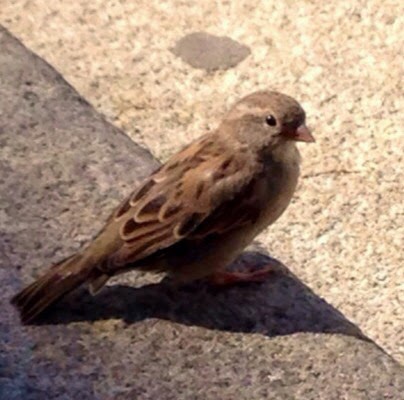 The second is this small piece, depicting pomegranates, as they grow on a tree. 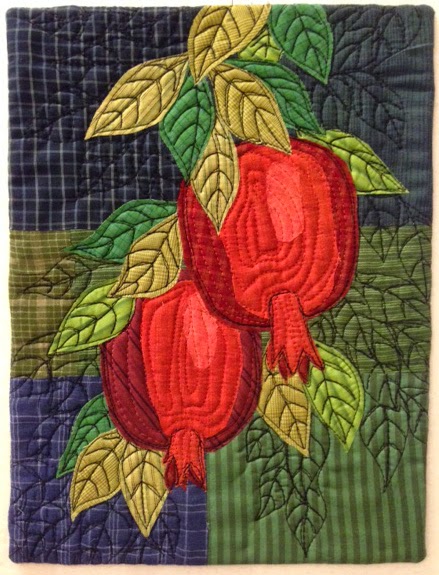 An abstracted image, using this photo of a pomegranate tree I took at the Alhambra as reference. 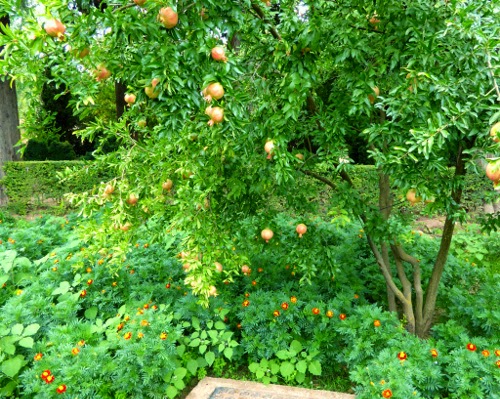 Would I try to render a photograph as realistically as possible in fabric? No. I don't see the point in that. That image already exists as a photograph and unless I can bring something new and personal to it I don't know why I would want to simply copy it. The bird, above, is close, I know, but I still feel I have brought something new, at least to me, to it.  Or maybe not.

As far as the discussion about the unoriginal/original quilt pieces in Houston, there was no agreement. Some folks think the fact that they were so skillfully copied is reason enough to give them a prize! Others of us are shaking our heads and thinking this represents a low point in any efforts to bring attention and respect to our art form. It is always, I guess, in any medium, the case that hobbyists and serious artists mingle and no one, not even the artists, knows which is which until these kinds of discussions come up.  I once saw an awfully cleverly reproduced painting of the Last Supper at the State Fair. It had a blue ribbon on it. Sigh....
Posted by Terry Grant at 12:34 AM 12 comments: Links to this post 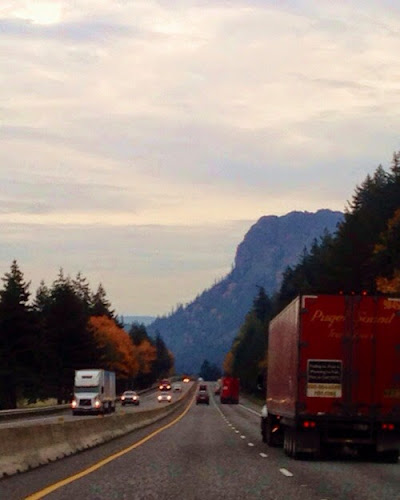 Columbia Gorge
It was a road trip to connect with family—to laugh, and cry just a little, with people we love. To cook and eat and play the favorite family card game and see how much the kids have grown and meet the newest kid and marvel over how fast time flies and remember good times and bad, and travel the western roads through the land that claims our hearts, from the Columbia Gorge of Oregon to the Bitterroot Valley of Montana. We covered a lot of ground, both literal and figurative. 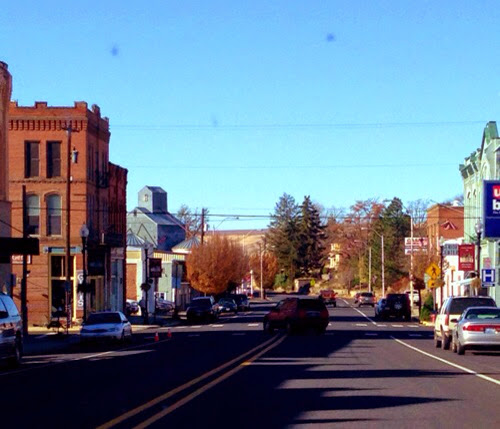 One of many small, western towns. They run together in my mind. This might have been Dixie... 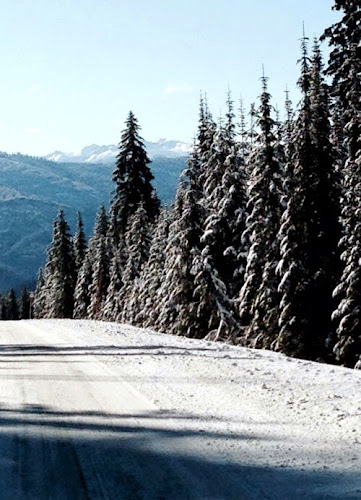 Lolo Pass, on the Montana-Idaho border 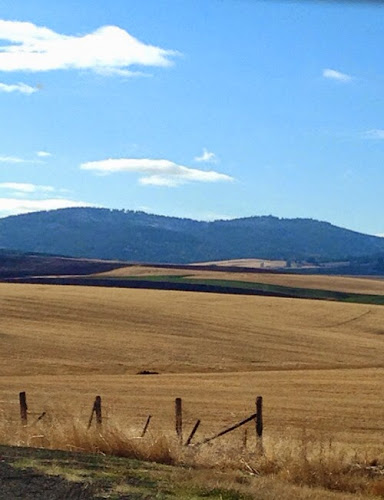 Camas Prairie, Idaho
In Montana I got to enjoy an exhibit of art quilts made by my creative sister-in-law, Jamie, and her friends in the Montana Bricolage Artists group. If you're in the area, you can see it at the Higher Ground brewery in Hamilton, Montana. The beer is good too! 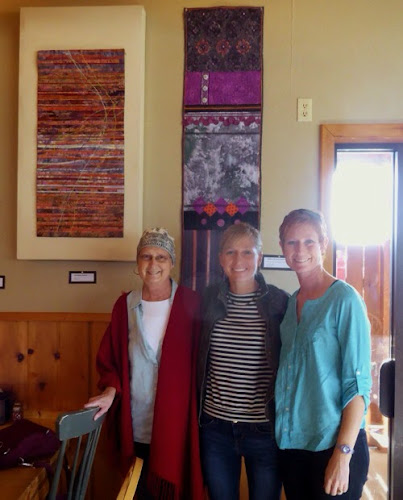 Jamie and her two daughters. I love these women. That's one of Jamie's pieces on the left behind them.

We got home tonight, coming back through the Gorge, just ahead of a predicted ice and snow storm. Winter is on its way and we feel it in our bones tonight. So glad we went—so glad to be home with good memories to keep us warm. 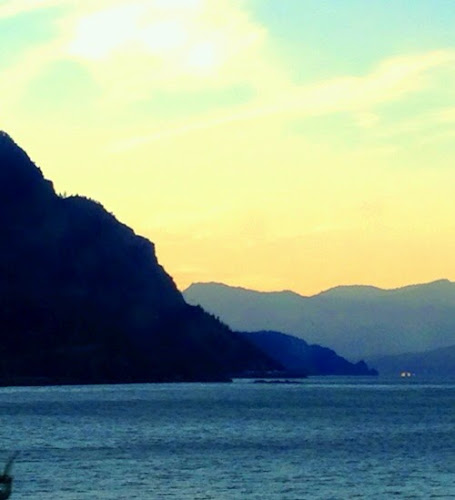 Posted with Blogsy
Posted by Terry Grant at 11:12 PM 2 comments: Links to this post

Trying my best to embrace the neutral. Here's a little before and after stitching. 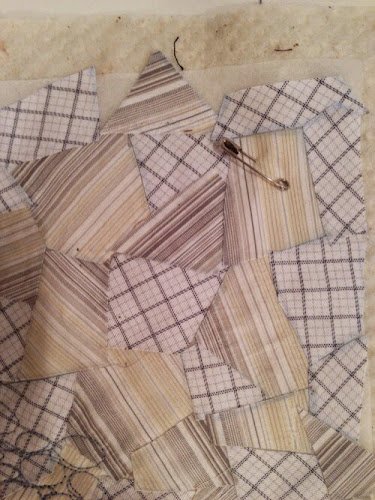 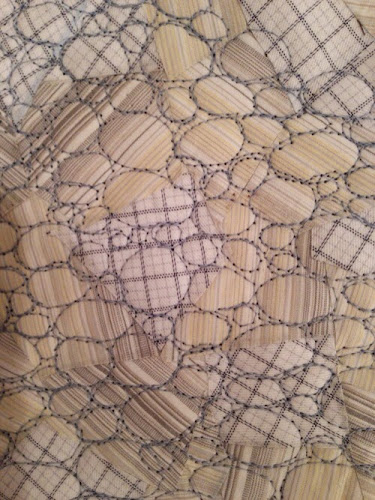 Crazy, right? This is why I love my medium. Stitching can transform the design. 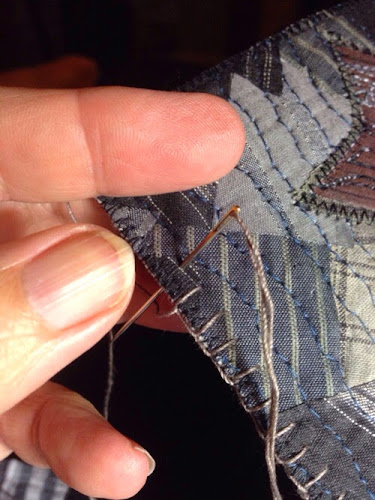 I am also trying out a different kind of edge finish.

Then I had this idea that I wanted to fiddle with, involving a pattern cut from white fabric and laid over a scrappy background. 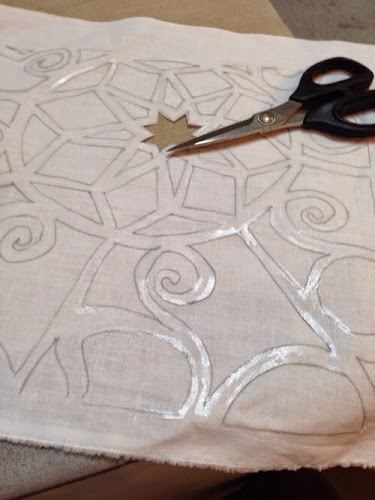 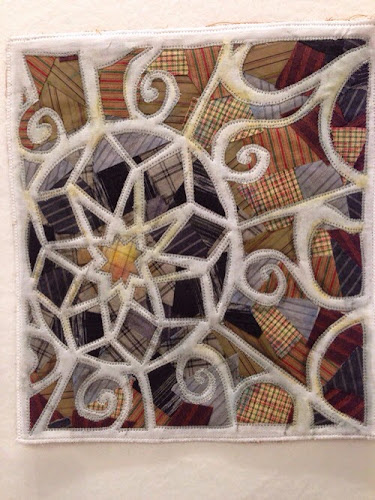 One of these days I need to get an idea for the real neutral piece.

We are off to Montana tomorrow to visit family. Looking forward to some beautiful fall scenery.

Posted with Blogsy
Posted by Terry Grant at 11:50 PM 6 comments: Links to this post