OK, I m back with my second December experiment. Here she is. 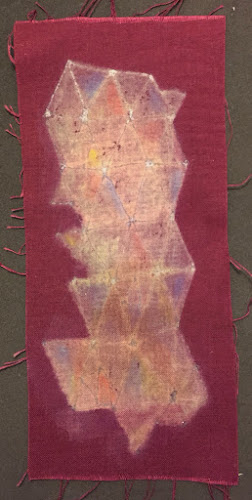 Here's what I did. Like yesterday, I used my metal tipped squeeze bottle, filled with clear acrylic medium to draw a design on my piece of burgundy colored fabric. Then I used a product called Decolourant, which is kind of like bleach and removes some of the fabric color. I painted it over my drawn design. After washing out the Decolourant and drying, I added a bit of color with those Inktense water color pencils. I expected the lines drawn with the acrylic medium to stay the same dark burgundy color as the original fabric color. That didn't happen and in fact the bleaching was even more pronounced along some of the drawn lines. Still there are some really interesting effects happening I think, and the mottled surface is rather appealing. But overall those nice little areas are so subtle that they disappear when you step back a step or two. I'm not calling this a total fail because I learned some things that I think can be used somehow—like those white lines...hmmmm

I'm still building that hillside in Quito. It has been slow going, but moving into the foreground the individual buildings are getting bigger, so I expect it will start coming together faster. 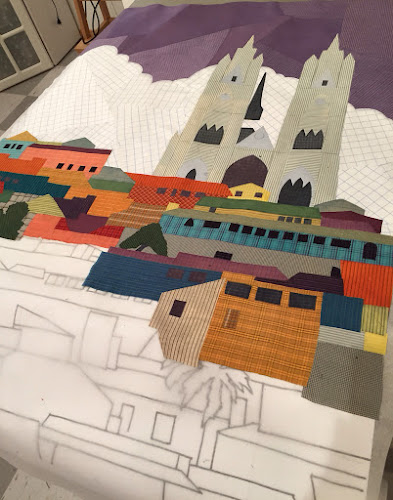 I presented the Art Literacy lesson to grandson Marco's Kindergarten class today and the artist was Velasquez and the principle that was emphasized was the illusion of depth—foreground and background and middle ground. As I was explaining to them how to make their own little craft paper compositions by starting with the background, i.e. their piece of sky blue construction paper, then adding the middle ground layer and finally a foreground layer I was thinking about how I was working this quilt in exactly the same way. Fundamentals. They work in kindergarten and they worked for Velasquez and they work for me. 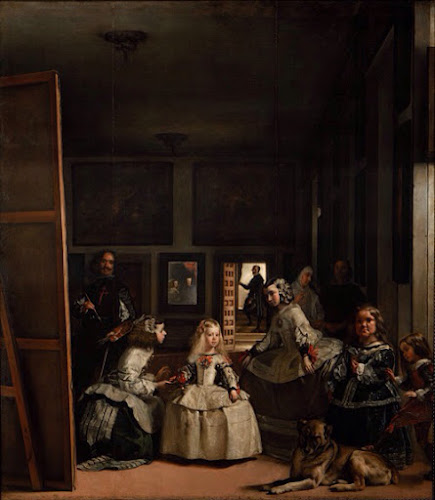 Posted with Blogsy
Posted by Terry Grant at 11:04 PM