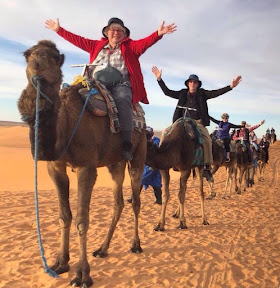 The vast Sahara Desert begins at the southern edge of Morocco. When we were researching our trip the prospect of seeing and setting foot on the Sahara was perhaps my deciding factor. It is hard to imagine how far it stretches across the African continent and visions of Lawrence of Arabia and the English Patient and endless dunes and immense, star-filled night sky were playing in my mind and calling to me. 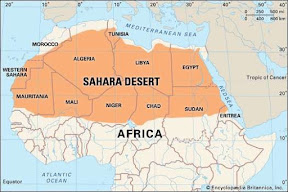 We traveled to our desert camp in 4-wheel drive vehicles across dusty roads that dwindled to paths, then bare rocky roadless ground and eventually made our way to sweeps of orange sand, drifting endlessly into the distance. Along the way we stopped at a Berber nomad camp—several small, black tents standing alone in the desert. We were met by a lovely woman and her precocious two-year-old, who invited us into her tent for tea. 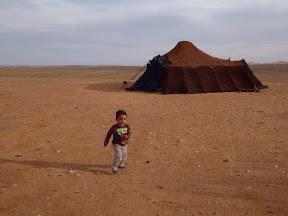 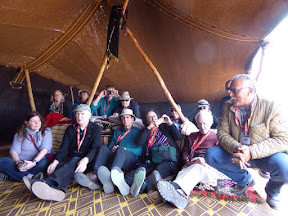 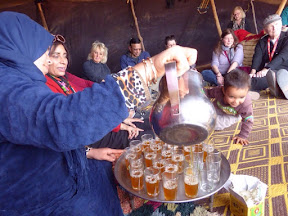 We sat on the carpeted sand. The woman reached behind a small curtain and produced everything needed for the traditional Moroccan mint tea. (Side note: wherever you go in Morocco, including private homes, businesses, restaurants, you are offered Mint tea. It is always, as you see in my photo, served in small glasses on a round, brass tray, and poured with a flourish from a foot or more above, which is not only charming ritual, but serves to cool the boiling hot tea for consumption. This tea service greeted us at the front lobby of every hotel and riad we checked into, as well as every home.) Our hostess invited questions, translated by Abdul, our guide, as her child scampered about, serving tea, examining our cameras and cell phones and entertaining us. Despite the barren, harshness of his environment, he could have been one of our grandchildren—bright, social and playful. His mother said when the time came he would go to school—they would see to that, of course. Besides the main living tent, there was a kitchen tent and a small open tent where her sister-in-law was weaving. 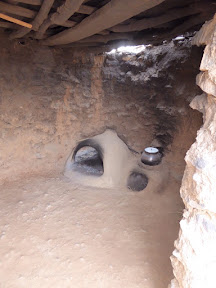 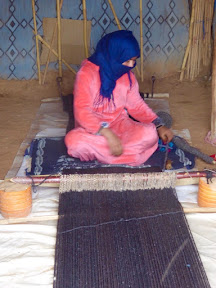 Onward to our camp for the night. Out where the dunes began we came to a last outpost and a bit beyond that our tent camp, surrounded by dunes. 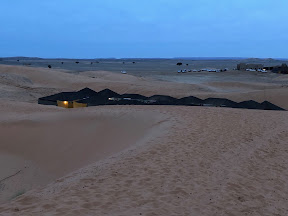 The tents formed a circle with a large open area in the center, each individual tent opening onto the central area. In the center was a firepit, surrounded by thick carpets and comfortable furniture. At one end was a dining tent. 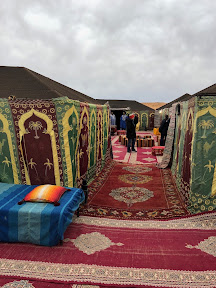 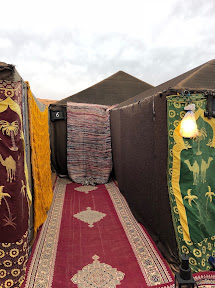 While our luggage was being delivered to our tents, we took a camel ride into the desert to watch the sunset. 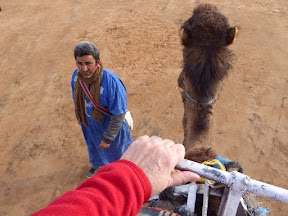 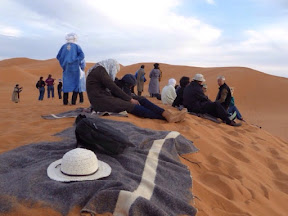 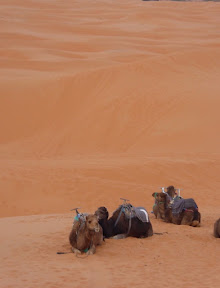 Camels, I had heard, are difficult, spitting, biting creatures. These were none of those things and we had such nice helpers getting us on and off and leading our patient beasts into the silent dunes. The silence in the desert seems huge. Even the chatter and laughter of our small group felt as though it was quickly swallowed up in the vastness of that silence. Back at our camp we prepared for the desert cold and enjoyed a beautiful dinner followed by music and dancing around the fire with the star-filled universe overhead. Each couple had their own tent, with hard, Moroccan beds piled high with wool blankets and layers of carpets underfoot. 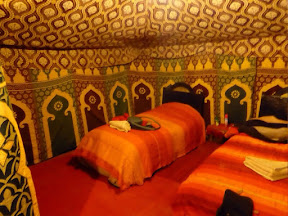 In a corner of our tent, a sink and brass kettle of water... 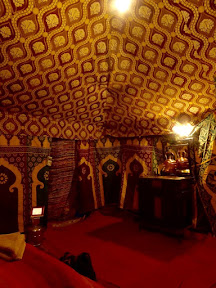 And behind a small curtain, toilet and shower. Nothing like Scout camp! 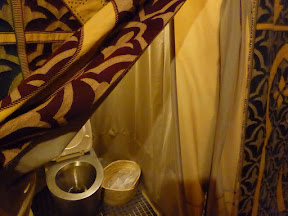 I slept deeply under the weight of all those blankets. In the morning a group on camels appeared on the dune above us, passing silently, like something out of a movie. 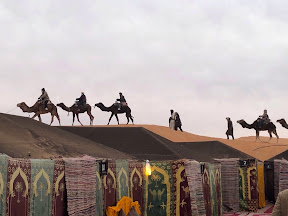 We carried our mugs of coffee out across a dune, under a lavender sky and waited to watch the sun come up.

I can close my eyes and see it still. 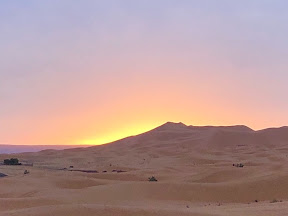 -Posted using BlogPress from my iPad