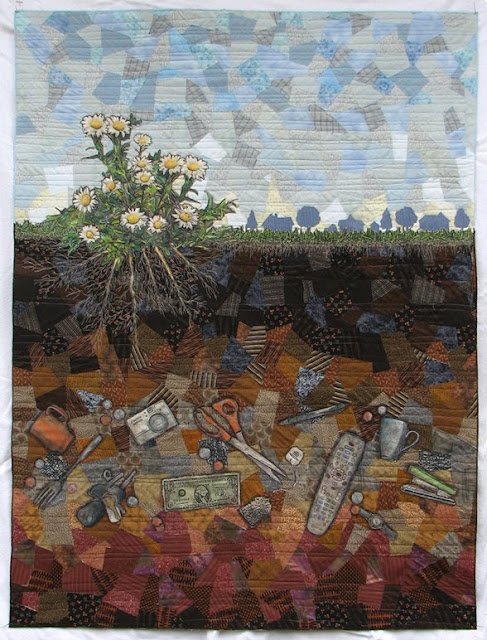 "What's Left Behind"
This is my entry that was accepted for the Beneath the Surface show. I am really pleased that 3 of my Twelve by Twelve friends also had work accepted. 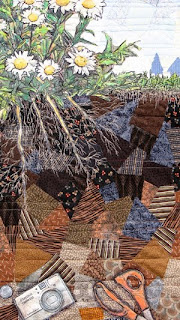 This piece measures 36" by 48" which seems HUGE to me, but really I guess it isn't all that big—just compared to most of what I make. It was really challenging. I was working on it during the same period I was writing my parts for the Twelve by Twelve book and preparing everything for the TV taping in Cleveland. The deadline for this was just a few days after our return from Cleveland. I nearly gave up on it a couple of times, but persevered. I have no perspective left. I have looked at it far too much to know whether I like it or not. I would have been disappointed, but not surprised if it had not been accepted.

I thought about the theme and my immediate thought was the idea that all civilizations have left clues to their lives and possessions in what was left behind underground. I wondered what we are leaving for future generations to find—probably those things that seem to disappear without a trace! Things like car keys and remote controls. Interestingly, while I was working on this piece two major earthquakes occurred in the world. It seemed to me this process of hiding our possessions beneath the surface was probably happening in Chile and in Haiti at a very accelerated pace. Remember the treasures Ray found in our creek last summer? It makes you wonder what you are walking over every day, doesn't it?

P.S. Because I know someone will ask—the objects that are hidden underground were created by scanning actual items then printing them on pre-treated fabric.
Posted by Terry Grant at 11:54 AM