Working on the big cone 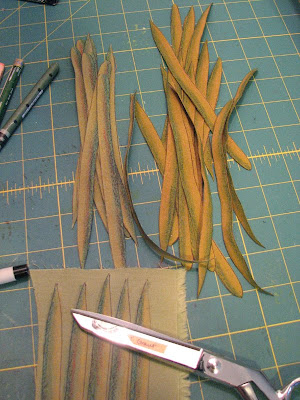 Several people referred to my design as a "pine cone". Technically, it's a fir cone, but that sounds odd to me too. When I was googling "Douglas Fir Cone" images for ideas, one popped up with the caption "This is not a PINE cone". OK, got it.

I started making needles for the branches that will surround the cone. Lots of needles. It finally made sense to me to make myself several templates to trace rather than draw each needle individually. Several, so that not all the needles would be exactly the same—a little variation in bend mostly. I got a bunch cut out and they looked like green beans laying on my cutting table.

I once made a small, postcard-sized piece that was green beans. It was for a magazine article, but I digress. 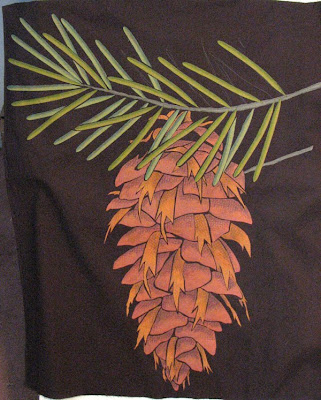 I started fusing beans needles to the background and soon used up all I had cut. I made more and cut them out last night while watching American Idol, so I now have a new bunch to start on. I am happy with how this is progressing. Once I get the cone and branches finished I will start thinking about a background to put it all against. (Did you understand that the dark brown will be cut away, leaving only an outline around the pieces I am now fusing?) I have some ideas, but I will need to do a bit of trial and error I suspect. People think I have my work planned in advance right down to the most minute detail. Not true.
Posted by Terry Grant at 10:18 AM