Some days I seem to encounter myself on other peoples' blogs. I tell you it is eery to read your own story coming from someone else's memory. 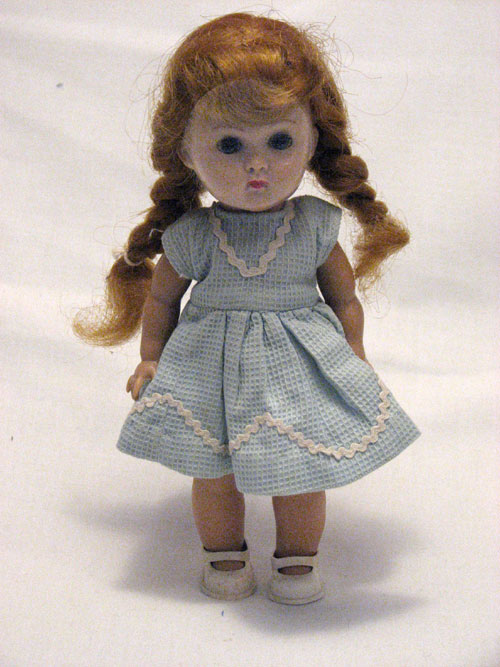 One of my favorite fabric artists is Sandy Donabed. I have "known " her for many years, though we've never actually met. She is, I think, exactly the same age as I and she lives in Florida and writes one of my favorite blogs. She is really funny, smart and interesting. On her blog today she told the story, which she has turned into an illustrated sketchbook, of how Ginny taught her to sew in 1952.

Well, ME TOO! That's my Ginny, above. She is about 8" tall and was the one thing every girl child wanted in 1952, and after adding up my birthday money I had enough to buy my own Ginny. My grandmother was visiting and she accompanied me to the store. Sadly, I did not have enough money to buy any of the many adorable outfits that were sold for the doll. Grandma said, "psssht, that's not a problem, we can make our own." That evening we sat on the front steps and hand-sewed a pleated skirt, blouse and matching tam. Grandma didn't fool around with beginner's stuff. During Grandma's visit we made several outfits for Ginny, including the dress above. It was made from scraps from matching dresses my mother had made for my sister and me. Ginny's dress is a simplified version. That was the beginning for me, just as it was for my friend, Sandy. From that moment on I was obsessed with sewing.

I fully expect to hear from someone else that Ginny also taught them to sew, probably in 1952. Spooky, isn't it?
Posted by Terry Grant at 11:17 PM