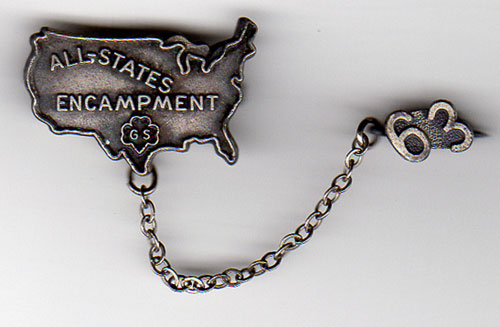 Fifty years ago this summer I embarked upon a great adventure—at least for a 17 year old girl from Idaho. As a Girl Scout, I was chosen to represent the state of Idaho at the Girl Scout All-States Encampment in Conowingo, Maryland. There would be 50 girls in attendance—one from each of the 50 states. We were all coming by train to Washington D.C. where we would tour the Capitol for two days and then depart to the camp in Maryland for two weeks. I had never been east of the Rocky Mountains and had never traveled without my parents.

The trip was planned months in advance with the plan that the representatives from Washington and Oregon would travel together from Portland to Pocatello. The girl from Montana came to Pocatello and we joined the other two and traveled together to Chicago. The Montana girl had an aunt and uncle in Chicago who met us and we spent two days in Chicago touring the city. Then we traveled on to Washington D.C. where we met up with the rest of the All-States campers. We spent two days in Washington D.C. touring the capitol, seeing the sights and meeting our Senators and Congressmen.

Here is the photo taken with Idaho Senator Len Jordan. I am next to Len Jordan. Next to me is Pat from Washington, then JoAnn from Oregon and Carolyn from Montana. 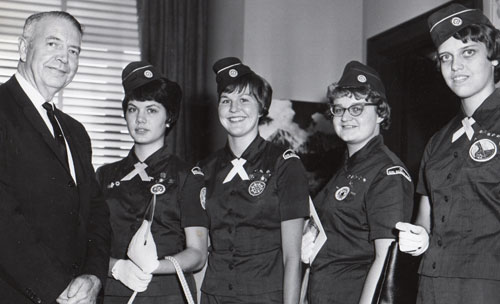 Senator Jordan was very gracious and had the photo taken, but I was more excited to meet Senator Mike Mansfield from Montana. He was much more well-known and was famously opposed to the Viet Nam War. I liked him a lot.

And then we boarded a bus to Maryland and the camp. There we shared projects and ideas from our local Girl Scout programs and spent the two weeks engaged in public service projects, the main one being creating a curriculum for a camp for underprivileged girls from the Washington D.C. and Baltimore areas. The first week for planning, the second week we had actual campers and tried out all our ideas and plans. We were so serious about this project and were assured that the programs we created would become a part of the ongoing camp programs. We worked so hard and we tried so hard to create something good and meaningful.

We were each there on our own. No one came with ready made friends. We bonded quickly and talked late into the nights and after two weeks we felt closer than I ever believed we could be. Many of the details of those two weeks are lost, but I vividly remember the last night when we sent paper boats with lighted candles out onto the lake in the darkness and swore that we would take back to our communities all of the good things we had learned and shared, like those flickering candles starting from the same dock and spreading their light across the lake. We would be candles. We would be lights.

The day we departed from the train station in Washington D.C. was chaos. The train station was filled with people, mostly black, in great hoards and they seemed to be in large groups that were traveling together. They were dressed in suits and ties and women in hats and gloves and they were happy and boisterous and seemed very excited. I asked the porter on the train if something was happening and he said all those people were coming in for the "big march". "Dr. King gonna be here" he added. We had been isolated from any news for the previous two weeks, so knew nothing of the planned March on Washington. It was hours later that I realized that "Dr. King" was Martin Luther King. Of course he was! And so, as history was being made behind me, I was on a westbound train with my head and my heart reeling from the experience of my young life.

To this day I am grateful for that experience. It was the first time in my life that I felt independent and capable of being on my own. I saw a bigger world than I had ever known. I learned that people can come together and accomplish good things. I learned that 50 girls from 50 places would carry a connection to each other for the rest of our lives. In a box in our attic there is a scrapbook of mementos and photos of that trip. I wasn't up for a visit to the attic today, but the little pin at the top of the page is something I keep in a frame on the wall. Today, on NPR I heard remembrances of the March on Washington and bits of Dr. King's famous "I have a dream..." speech. I missed it in real time, but I always remember it in connection with my great adventure. We were trains passing in the night. It was a time of such hope and aspiration and sincere, maybe naive, belief in a better society. Not all those hopes have been realized, but I still believe. And I feel lucky to have been a Girl Scout, and to have been chosen to represent my state and to have lived in such times.
Posted by Terry Grant at 10:47 PM