Off I went, last Wednesday, to Oregon City to a memorial service. Bertie was my Dad's cousin and perhaps the last of that generation of his family. She died at age 96 last month. Though I hadn't seen her in years the news brought back memories of family reunions at the beach where she lived with her second husband, George. Bertie was the organizer, the hostess, the greeter, the hugger of babies, the introducer of cousins—once, twice, thrice-removed; and the happy hostess presiding over each gathering like the mother of us all. Everyone adored her. But then, as cousins, especially the twice and thrice-removed do, we lost touch, had families, moved apart and focused on immediate family. Our parents grew old and one by one they passed on and family reunions were a thing of the past. So, no—I hadn't seen Bertie in years. And though I knew I wouldn't recognize anyone there, nor would they know me, I felt I needed to go to the service.

Why? I asked myself why I was going as I drove to Oregon City. And again, sitting quite alone in the chapel, I wondered why I had felt so compelled to be there. But I knew it was because of Dad. He would have done the same. He loved Bertie. They had been children together in Montana. And too, I remembered when he died there were people I didn't know who came to his funeral and found my siblings and me afterward to say that they came because my Dad had been kind to them at some time. Because he meant something and this would be their last chance to acknowledge that. And that was why I was there.

After the service I made my way through the crowd to introduce myself to Bertie's son and daughters, who I knew would only remember me after I told them who I was, and tell them how fondly I remembered their mother and how I knew what a good life she had led and how much she would be missed by them. A small thing, but I could see that I had been right to come. One daughter urged me to join them at the reception after and especially to take a look at Bertie's scrapbooks they had brought along. And that is where I found the second reason I had come. Old photos. Very old photos in a book that had actually been Bertie's mother's album. Bertie's mother was the sister of my grandfather. Their parents were my great-grandparents and it follows that their grandparents were my great-great grandparents and there they were in the album. Identified only as Grandpa and Grandmother Jones. The photo was taken in 1866 and I was seeing their faces for the first time. 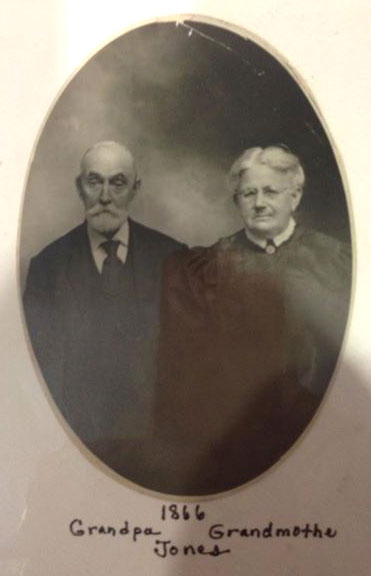 It took me a moment to understand who these people were and then another to catch my breath. I nearly grabbed the sleeve of the man standing next to me to tell him "these are my GREAT-GREAT GRANDPARENTS!" Such was my excitement. Instead I coolly took out my phone and took the best photo of the old photo that I could get. I saw many old photos, some duplicates of those handed down to my brother, sister and me. Included was a photo of my grandfather that I had never seen before. 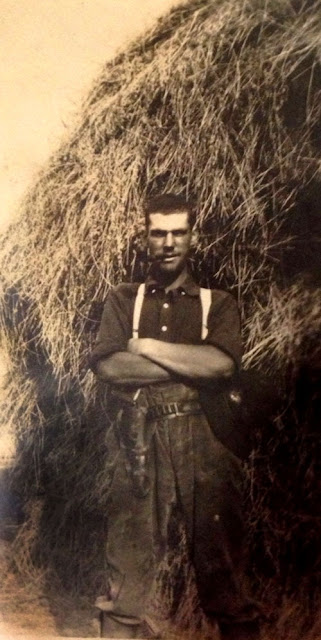 I knew my grandfather, but only as an old man who puttered in his garden and told funny stories. Here he is, pipe in mouth, gun on his hip, young and handsome and strong—look at those arms! How strange, in a way, to find my family here among virtual strangers, and to know that my family was their family.

And now there is more. Not the same, but somehow related.

Yesterday I got a message through Facebook from a woman I don't know. I suspect she found me through mutual friends. She wrote to say "As of late, I've been working at changing my focus from the problematic people I've encountered...to the good, kind, and gentle folks who FAR outnumber the bad eggs." She went on to tell me a story about serving with my Dad on the Pocatello Airport Commission many years ago and discovering that her father was an employee of my Dad and that he and Dad had a great friendship, besides their working relationship. She told of Dad's kindness when her father died and spoke of his intelligence and kindness and gentlemanly demeanor. She closed by saying "Some people make a bigger mark in your life than others...and because of their personal integrity, and positive life force, it doesn't take a lot of exposure. Just felt like sharing with you...we all like to hear good things now and again."

Yes, we do. Especially about the people we love. Her message was a gift that I couldn't have imagined. And I couldn't help but hope that I had given the same small gift from a stranger to Bertie's family that this woman gave me. A reminder that a kind word has force and power. We shouldn't be so stingy with those kind words.

It has been an enlightening week.
Posted by Terry Grant at 11:58 PM