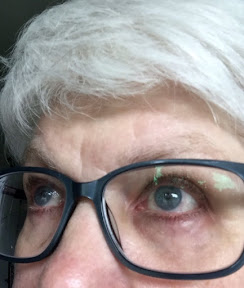 I have glaucoma. For the past four years it has been controlled with expensive eye drops, then suddenly the eyedrops weren't working anymore. Glaucoma is a condition where the pressure inside the eye is too high, which begins to destroy the optic nerve, leading, eventually, to blindness. My pressure was too high, despite the drops.

So, here's the thing about glaucoma—you don't know there is anything wrong for a long time, or until your eye doctor checks your pressure and discovers the condition. My vision was not affected in any way I was aware of, but, according to my doctor, I was in something of a crisis. She sent me to a glaucoma specialist. He recommended we try a laser procedure—one eye first—to see if that would lower the pressure. It did—but not enough. So this last Tuesday I had an eye surgery called a trabeculectomy, again on one eye. I was nervous, knowing that this was a serious modification to my very eyeball and held higher risks than the previous treatment I'd had. The surgery itself was OK—good drugs get one through it with minimum trauma! Now I am healing, which will take awhile. Only later will I know if this will be the solution to keeping my eye pressure at a safe level. If it does, we will do it again, to the other eye.

I have had a lot of time to think, and I have a tendency to think too much. Maybe what I mean is that I worry. The day after the surgery the Doctor said it looked good. My vision in the operated on eye was pretty bad, but he assured me that was normal and it would get better. The next day it was worse and I panicked. A very bad day. I was cursing the idea of disfiguring what had seemed a perfectly good eye and rendering it useless! The next day it began to clear and today, even more. My anxiety has lifted considerably. I have many restrictions as I heal—don't bend over, don't lift anything heavier than a gallon of milk, don't sleep on the affected side, wear a shield over the eye at night, eye drops every two hours... Healing my eye is my job for the next few weeks. And I hope for the best. And I try not to worry. The "best" is stopping glaucoma's progress. The damage that has been done cannot be undone, and unlike my friends who are having cataract surgeries, my eyesight will not be better after surgery than it was before.

Glaucoma is hereditary. My father had it. But you may have it regardless of heredity. It is also more common than you might imagine. I know at least four people who also have it. Have your eyes checked every year. Just do it. Don't think "they seem fine." Mine seemed fine too.

So I celebrate the gift of sight and am enjoying a beautiful day here and all the beauty my eyes can see. Send me a good thought for a good outcome and take care of yourselves... 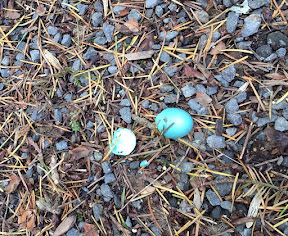 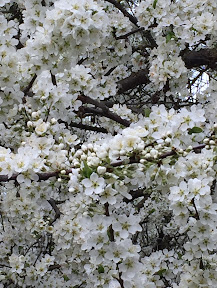 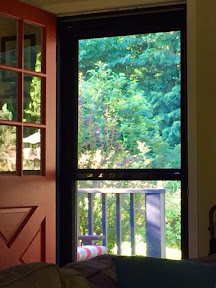 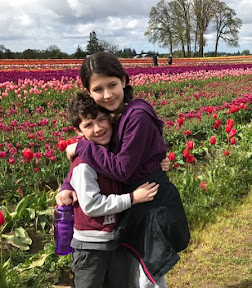