I have been making hot pads. Obsessively. I know, that's pretty crazy. But hear me out. It isn't that I want or need a large number of them, but they are nice to have, right? No, it's really about figuring something out. And this is an intriguing little puzzle.

It all started when our knitting group went away for a weekend at Hood Canal—an incredibly beautiful place in Washington state. We relaxed. We ate, we drank wine, we laughed, we knitted. Except for Joyce—she crocheted cleverly constructed hot pads that were a nice thick double layer. Like this. We loved them, but why, some of us wondered, couldn't they be knitted, instead of crocheted? I like knitting, and I like the way knitting looks—better than crochet.

You can find everything by Googling, and, sure enough, someone had interpreted the clever hot pad into knitting instructions, so I made one. 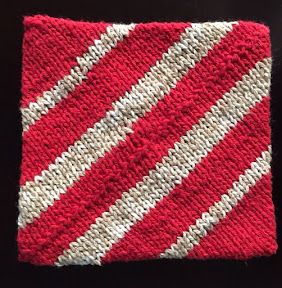 The way this was done was to knit a tube, in the round, cast-off and then sew each end together after making the fold that gives it its diagonal stitch pattern. So it has, as you can see, a diagonal seam through the center and another seam on the other side. It was OK, but wouldn't it be nice if you could make those seams disappear? As fate would have it, my friend, Kristin LaFlamme was knitting at our STASH meeting and showed how she had cast-on a sock in a way that created a smooth, seamless toe, using something called a Turkish cast-on. I tried it on my next hot pad and voila!—no visible seam on the top side! 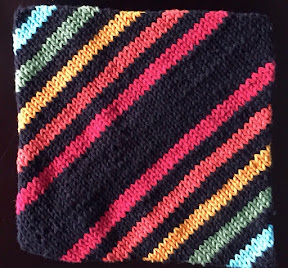 But there was still a seam on the back side. 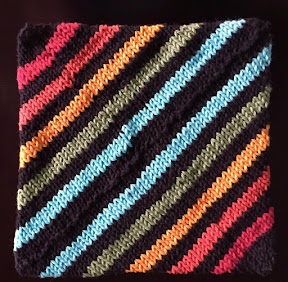 Back to Google and a YouTube video demonstrating the Kitchener stitch for invisibly joining two knitted edges. It is a complicated piece of work and my first attempt at Kitchener stitch was not great. Meanwhile I had run across Judy's Magic Cast-on, which was even better for my project than the Turkish cast-on. 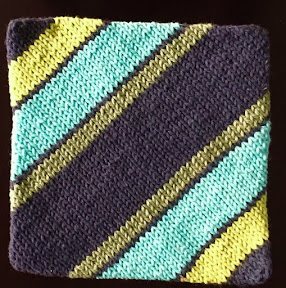 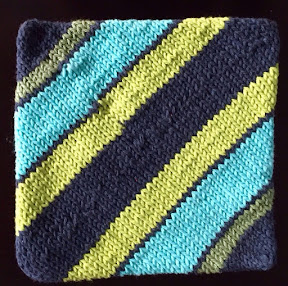 Now I had a basic recipe and needed to perfect my technique. 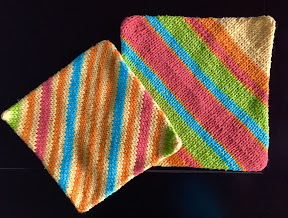 Same pair, back. That Kitchener stitch was proving to be my nemesis, but getting better with each one: 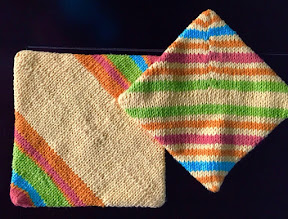 Now while I was concentrating on getting those seams smooth and invisible, don't think I didn't notice the ugly jogs in the stripes where they start and end. There are many YouTube videos that address how to create "jogless stripes" and each had a different approach. I tried many with limited success. I'm still working on that. The latest one looks promising. 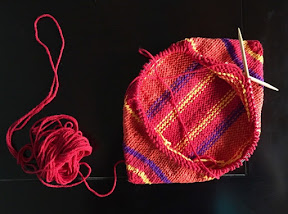 So, I am making one hot pad after another,each one just a little better than the last. Do you see, it's not about hot pads? It's about mastery. This is how I learn. And after that first, boring red and beige hot pad, I decided it would be more fun if I had more colors to play with, so I went out and bought a bunch of balls of cotton yarn. It's cheap, comes in great colors and won't melt if you put a really hot pot on it. Because when all is said and done and I finally make a really good one, I will have hot pads for me and some friends and relations to use until they are faded and ragged and scorched. Then maybe I'll make some more. Maybe.