Struggling with the sand

It was really interesting to read the comments on people's preferences regarding diagonal or horizontal lines in the sand background. I think either could work but Diane hit on exactly why I was leaning toward the horizontal lines when she said, "To my eye, the horizontal lined background emphasizes the float more. The diagonal lines are striking, but somehow that takes away from the serenity of (what I imagine to be) still sand. So I like the horizontal lines better..."  I, too, liked the more serene feel of the horizontal lines and they seemed to offer a more solid foundation for the float. I also liked the rhythm of horizontal lines. Diane is one of the Twelve by Twelve artists and as I have gotten to know her I notice how often our thinking seems to align. So much so that for two of our challenges we made extraordinarily similar pieces. Thanks for your thoughts, Diane!  I always value your opinion, because I think we share similar goals in what we're after. 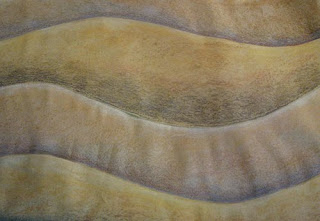 Once I made the decision to do the horizontal design, the execution was not really smooth sailing. I started by using two separate fabrics for the stripes. The more yellow fabric was cut, textured and fused to the more beige-y fabric.Once I saw the stripes coming together it seemed to me that the applied stripes were dirty looking. I think my shading was a little heavy-handed and the color a bit dead. Fortunately the fused stripes were barely fused and were easy to remove. Then I just continued to create the stripes on the single piece of background fabric. 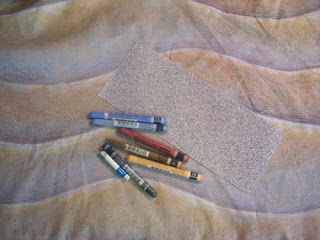 I used a sheet of coarse sandpaper under the fabric and rubbed with water-color crayons to get the texture of the sand. Instead of the dark taupe and brown shadows I had been using I used a combination of blue and orange, which created an almost purple shadow. Much more lively than that dead brown. 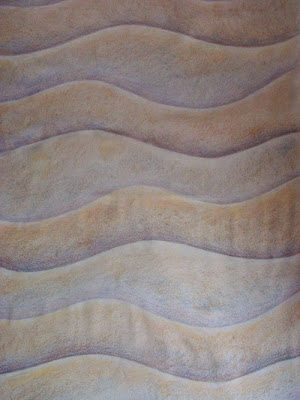 Here is the finished piece of fabric. The next step will be to quilt the entire background. So far there is no stitching, though the edges of the shadows almost look like they've been stitched in the photo. I have been working on this all day and it has been a struggle. I think it is going to work, but it's not really there yet.

This is the point where I often get to with a piece and I just have to push on with faith that my plan will work out. I could easily give up on it at this point, but I think I have learned to keep seeing ahead to the next step. Not that everything always turns out well, but I think almost all (maybe all) of them go through a bad stage along the way. Do you go through this with your work?
Posted by Terry Grant at 6:01 PM