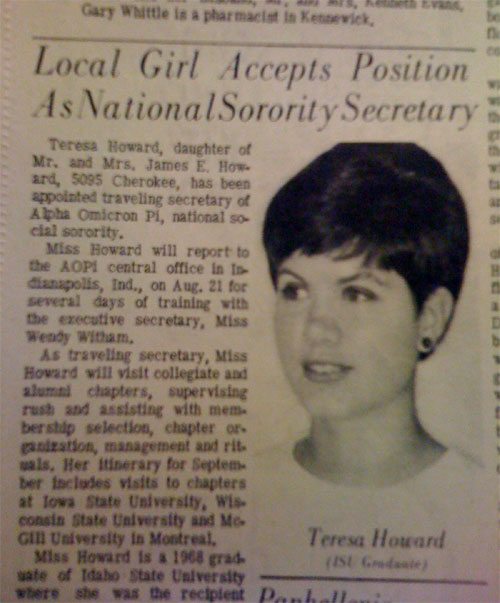 In the fall of 1968 I began working as a "traveling secretary" for my college sorority. November found me in Montreal, visiting the chapter at McGill University. I'm not sure I had ever been as far from home and I was outside the United States for the first time in my life. Provincial as I was, it seemed a world away from my family and my roots, and by then I was very tired from a non-stop travel schedule. I arrived in Montreal with a sore throat and an ear infection and a fever, but I was warmly welcomed and soon ensconced in a charming brownstone apartment shared by several of the chapter members. It would be my longest chapter stay to date—2 weeks. The girls in the apartment all had tickets to a Gordon Lightfoot concert a couple days after I arrived. As luck would have it there was an extra ticket, as one of the group had to attend to a family emergency in another town. I went to the concert, not knowing a single thing about Gordon Lightfoot, despite the fact that he seemed to be on magazine covers and posters all over Montreal. I was carried away by the music and his themes of longing spoke to my state of mind. The next day I walked down a snowy street to the big Eaton's department store and bought his album. The next two weeks, as I recall, included lots of tea, a visit to the Hospital Emergency Room when my ears became so painful I could not ignore them, interviews with the lovely girls and alumnae and the Gordon Lightfoot record playing in the background through it all.

Montreal was beautiful, the people I was with were kind and funny, and the early snowstorm had blanketed the city in pure, silent white. I felt like I was in a dream most days and wondered if I could possibly remember every detail. How I wished I could share it all with someone and for the first time it occurred to me that this year of travel was such a solitary experience that I would never have anyone to look back on it with. I would carry these cities and people with me, alone in memory, as indeed I have, with no one to share those memories. And somehow it was the music that was the most tangible thing I took away.

I missed my family. I missed my friends. I had a boyfriend, who I knew was never going to be the right person for me, but I missed him too. It was the deepest homesickness I have ever felt and at the same time the adventure of a lifetime. And when I listen to this music I feel it all again. 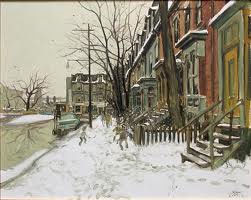 I looked for a photo of Montreal in 1968 and found this painting: John Little, R.C.A. (b. 1928) November Snow, Jeanne-Mance Square (corner of Sherbrooke Street), Montreal, 1968. It actually looks like the street where I stayed, and, amazingly is titled November Snow. This is what I remember.
Posted by Terry Grant at 10:29 PM