What an interesting morning I had!  The production crew from the Alex Anderson/Ricky Tims web TV show, The Quilt Show, was here taping in my studio for about 4 hours. There was a big surprise element, as well. While I knew the crew would be here, I did not know that Alex Anderson would show up as a surprise. I think I was expected to scream or jump up and down, but I was so confused that I think I just looked a little stunned! Ray was on hand, with his phone/camera and caught a little of the surprise. 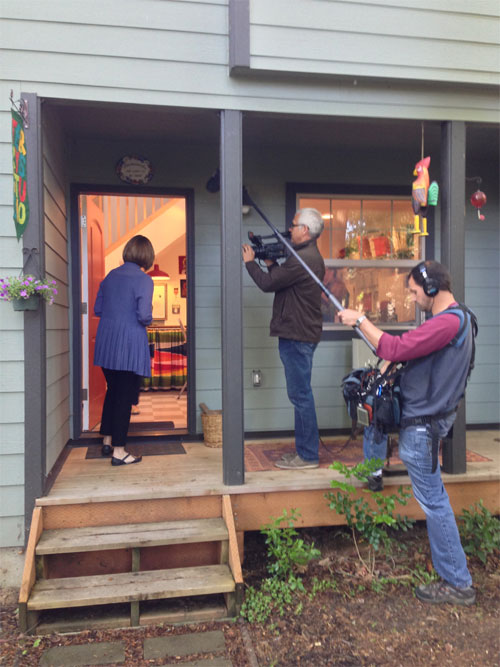 Alex coming in the front door 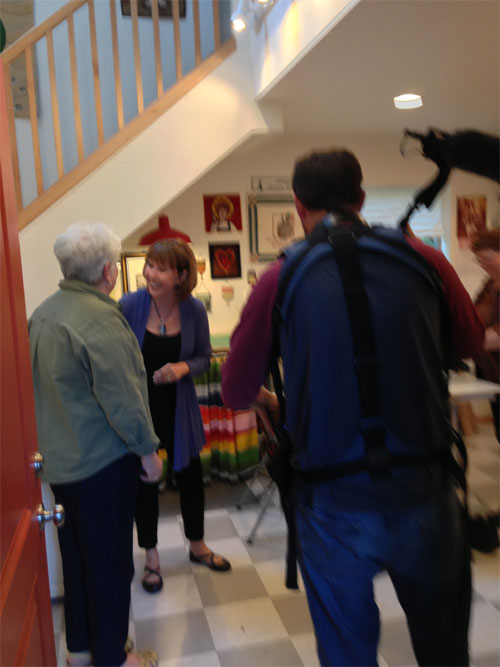 This all started last October when Shelley Heesacker, the producer of the Quilt Show, came to my Open Studio. Shelley also works for Oprah and Dr. Phil and just happens to live near here in Forest Grove, Oregon. We talked about doing a segment for the Quilt Show and Shelley left her card and said she would be in touch. I didn't hear from her again until last week. The Quilt Market is in Portland this weekend. It is the big national Trade Show for the quilting industry and an opportunity for Shelley and her crew to tape some of the big name quilters who are in town for the show, and some of us local quilters as long as they were on a roll. So Shelley contacted me. Since Alex was also in town for the market, they decided to have her make a surprise visit to the studio. They might make this a regular feature—"ambushing" a quilter in his/her studio—in the future. While she was here she taped a little promo for the show, which I captured on my phone. Click the arrow to play.


We taped a tour of the studio. We talked about my series of shirting quilts and I showed some older work. We talked about the Twelve by Twelve project and book. We talked about my blog. I talked about myself and how I got to be an art quilter and what I want to do next and blah, blah, blah! It was a lot and will probably end up as a 10 minute, or less, segment on the show. The crew were terrific and Shelley is super impressive—so organized and interested in everything and obviously very professional in her work. Alex is just as she seems on TV—very energetic and vivacious and very warm and friendly. Smart and pretty too. I was really fascinated by the entire process and ceased being incredibly nervous about 3 minutes into it. 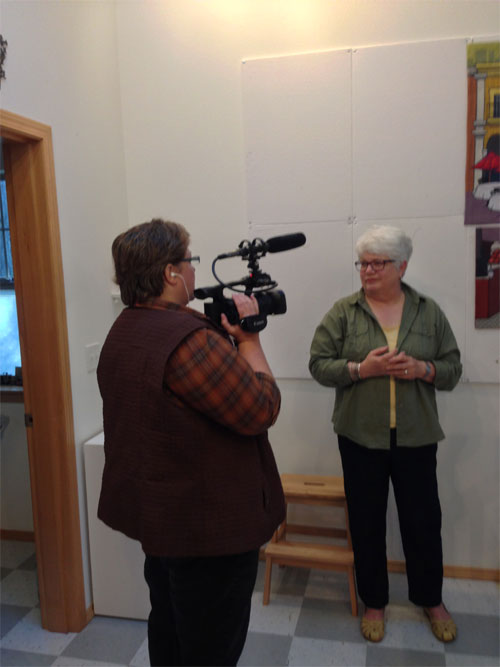 Shelley couldn't tell me when this will be shown. They do a lot of taping, then start sorting it out into individual shows. It will probably be next year before it is on. I will know in advance, however, and will post the information when I know.
Posted by Terry Grant at 2:19 PM