Week two of our digital drawing exchange. I think we are both showing growth, even in such a short time! Well, we are enjoying it anyway. This week's theme, suggested by June, was two household items of any size or mode that "talk" to one another. Anything from tchotchkes (knicknacks) to pianos; "talk" in the visual sense.

Terry
Panama Hat and Ceramic Orb
Is a hat a household item? I hope so! Both are souvenirs of Ecuador and nearly identical in color. I wanted to try using some of the pattern brushes and I must say I was pretty pleased, especially with the way the multiple line brush approximated the woven texture of the hat.  I also used a "speckle" brush on the orb which softened the surface nicely. Those pattern brushes might not be as hokey as I first thought.

I have to confess that I started with a photo and used it to trace the outlines of the two objects, then cleared the photo layer and worked from the setup for the rest. 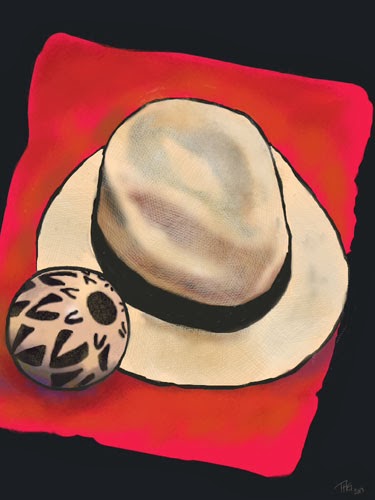 June
Crow Calculus
Back when I made a lot of art using crows as a subject, Del Thomas sent me a little crow desk ornament. Made of something very hard and heavy, the crow has watched me with interest for years. Its head is tipped to one side inquisitively, and the detail  on the statuette is
compelling. It sits on my printer stand, beside the calculator that is solar powered.

The details on the statue made it possible for me to copy the wing patterns nicely. I didn't quite capture the tipped head, but liked the way it looked at the calculator. Hence, Crow Calculus. 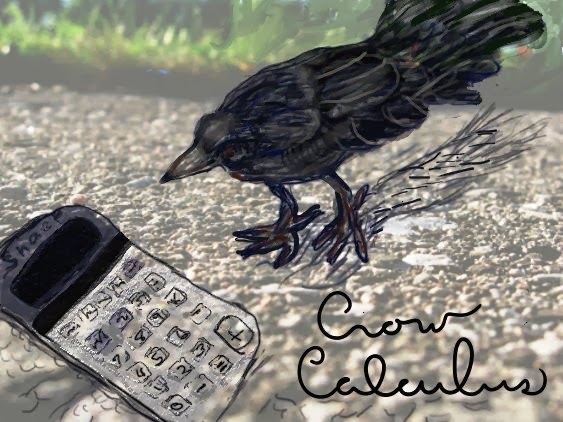