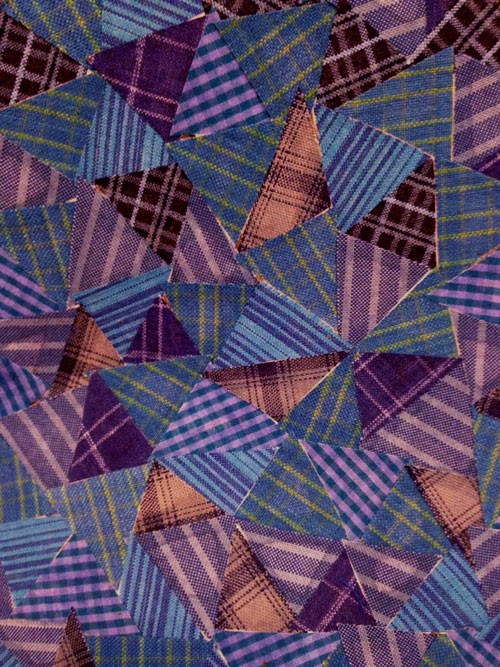 I have an idea for the "What's Blue to You?" theme quilt. I am into it. I have been working feverishly. Part of it involves cutting many blue triangles. Today I cut triangles. All. Day.

After I wrote my blog post about being stuck for an idea I got lots of great ideas from comments on the blog and on Facebook and though I did not choose any of those, they got me thinking. My sister posted a link to a podcast about blue that was absolutely fascinating. It is a podcast of the Radiolab radio show, which I love. I had missed that episode, called "Why isn't the sky blue?" I listened to it at the gym yesterday, which made my 30 minutes on the treadmill fly by. I'm not going to tell you about the whole thing, but I will say it opened my mind to the color blue in a whole new way. From the web site description: "...a book of German philosophy from the late 19th Century helps reveal a pattern: across all cultures, words for colors appear in stages. And blue always comes last..." Intrigued? You can go hear the whole thing here: http://www.radiolab.org/story/211213-sky-isnt-blue/

One of the things mentioned in the story is that blue is very rare in the natural world. Hmmm. I never thought of that. There is no blue food. (Yeah, blueberries—but to me they are actually purple) They said that most of the flowers, that we see as blue, have been hybridized, over many, many years to get that color. Blue flowers are not really natural. There are some blue minerals, but they are rare as well. No blue dyes existed in the ancient world, until indigo was discovered as a dye. Ancient people really did not know the color blue. But the sky! The sky! That's the paradox of the story. The sky has always been there, but may not have been recognized as being the color blue. Don't argue. Just go listen to the podcast if you don't believe me. Anyway, all the way home from the gym I was searching the landscape for blue and the only blue I saw were cars and people's clothes and bicycles and signs. Man-made stuff. Not even the sky was blue today. So I came back to my studio and began pulling out lengths and lengths of blue fabrics and, honestly, they seemed like a miracle.

So, I will reveal what I am doing with blue when it gets a little further along, but I will tell you, it is all about a memory of blue. Something good that was blue. Blue, the color, not blue the feeling.