Rejected, but in good company

Yesterday the Portland SAQA (Studio Art Quilts Associates) group met and got a look at some of the pieces that were not selected for the upcoming SAQA show called "Exploring Layers." I suggested we might do this because there were more pieces rejected than accepted and rejection is hard and misery loves company and it is just a good thing to share one's failures along with the triumphs. We all feel better when we know we are not the only ones. Besides, we all worked hard and hopefully on these pieces and it would have been a shame if no one ever saw them. 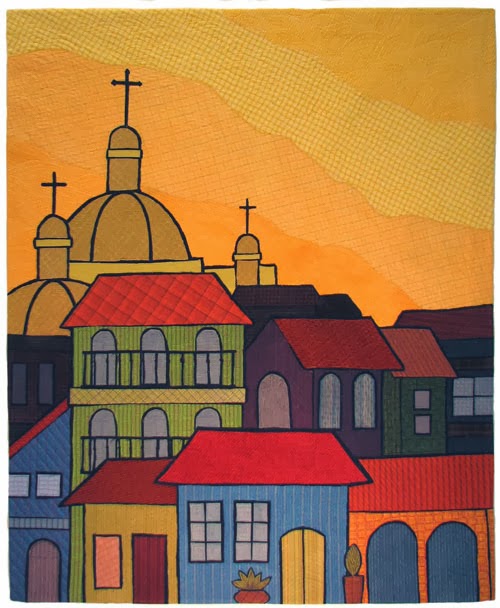 This was my entry, called "Layers of Culture, Layers of Time." You saw me struggle with this piece. I was never really satisfied with it, but I felt it was worth submitting. Looking at it now I actually like it better than I did when I finished it.

I don't know why it was not accepted for the "Layers" show. One rarely knows what is in the mind of the juror. Since I have been laying out the catalog for the show I have seen photos of what was chosen and I think this piece would not have really harmonized with the rest. The choices ran to more abstract, visual layering sorts of things. It will be a good show, without me! It is always easy to make yourself feel better to just decide that your rejected piece simply didn't play well with the rest of the show. And that might be the truth, in fact. It is also possible that it just didn't stand out in the crowd and could have been more appealing and wasn't your best work. I think it is always useful to consider how it could have been better. This is really a big piece and I think those large sizes are hard for me. I wanted to simplify the shapes and in doing so I think it became rather static. I also lost the effects of the combinations of the fabrics that play off one another in small pieces when I chose to use fairly large pieces of the fabrics. It is visually "flatter" than I had hoped.

Several years ago I was involved in helping to jury a show for High Fiber Diet. One of the artists whose work was not accepted became angry and demanded to know "why." She was told that her piece simply did not fit with the rest of the show that was chosen. She left the group, hurt and defeated. I have never forgotten that and still feel badly for her, but it provided an insight into the dynamics of acceptance and rejection and I vowed never to let myself be that defeated by one rejection. It is part of the game. It is a kick in the gut, but an opportunity to critique yourself and live to try again.

I think we all enjoyed sharing our rejects. I think it felt good to know that we were in good company. Some of the pieces were lovely. Some not so great, but we turned the session into a learning experience and even had a few laughs when one member showed her piece and joked that she planned to cut it into three table runners. 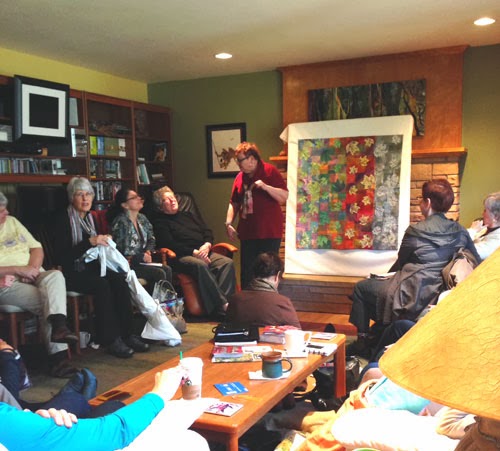 Here, Gerrie shares her rejected leaf design piece.  Another flawed, but lovely-in-some-way, quilt. This one has a future—with a few modifications.

I left feeling oddly uplifted and supported, as well as a new fondness for my ugly duckling quilt. With all its faults it is kind of vibrant, don't you think?