How one thing leads to another...

Two things I know about myself:

When we removed the white cabinets from the kitchen several years ago, we carefully stowed them in the falling down shed out back because I thought they might have some use in the future studio. However, little by little Ray kept pulling them out of the shed and setting them up in the garage where they have made a very nifty work and storage area in the garage. But not much was left to choose from for the studio. Well, actually one thing was left—a corner unit with a lazy susan inside. Determined not to let a perfectly good, ugly and slightly battered monster thing go to waste I decided it could be the corner support for my sewing table, so Ray and I wrestled it out of the shed, over hill and dale and into the studio. It weighs about 10,000 pounds. Once in the studio I quickly realized that, duh, it was too tall for the sewing table. I thought Ray was going to cry when I told him. He had not only muscled the darn thing into the studio, he had lain on his back, with his head inside the cabinet, cursing and grunting and reattached the doors once it was inside. So it sat there.

I began to wonder if it might work as an island work area in the center of the studio. My friend Jeri and I brainstormed it and decided putting it on casters was the way to go. I then got Ray to cut a plywood top for it and planned to pad it and cover it with canvas for a printing and/or ironing surface. The canvas I had was an inch too narrow (of course) so I went off to the fabric store where I discovered ironing board fabric by the yard. 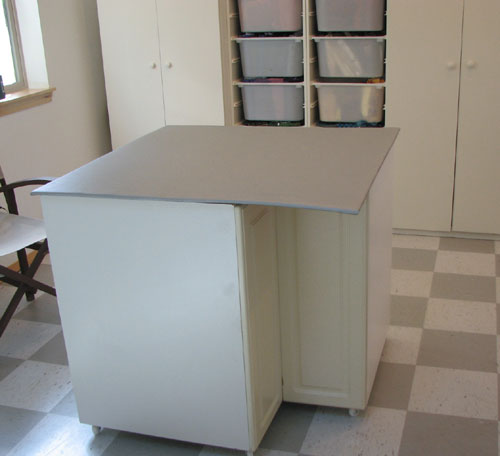 It required only three trips to the hardware store. One to get the casters, the second to get two more casters because that corner cutout made it tippy with only four casters and the third to find shorter staples for attaching the padding and fabric to the top. I know it's sort of weird, but I think it might be pretty useful. And, look, lazy susan storage inside. 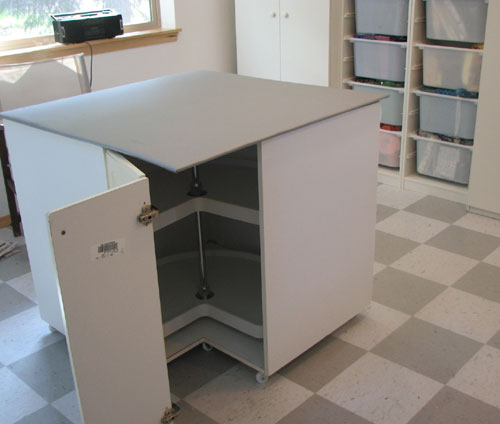 I know I shouldn't have shown all this and just let you think I had this specially built for the space.