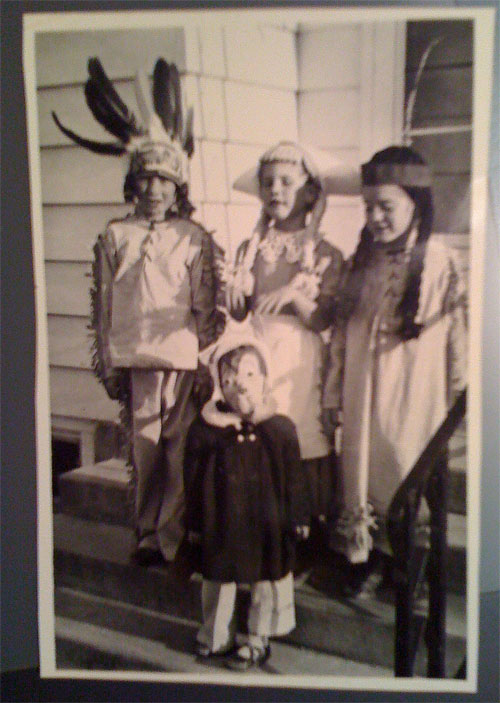 This is how we used to do it in the "olden days." Homemade costumes, not so much dependent on the Disney Princess canon. I'm the limp-wristed Dutch girl in the center. The "Indians" (sorry, the term "Native American" had not yet been invented) were the twins next door and the small creature in front is, I think, my sister. I have no idea what she was supposed to be, but I can sure clearly remember what the inside of those rubber masks like she is wearing smelled like. We roamed the streets in hoards on Halloween evening, hitting every house, except for the Skinners', because they were scary people every day of the year. We climbed the hill and all those stairs up to the Hardys', because they gave out doughnuts. The old lady up the street handed out homemade popcorn balls wrapped in wax paper, but my mother made us throw them away when we got home because the woman's house smelled really bad. The rest was a jumble of cheap, sticky candy which we pigged out on. Not so much regard back then of regulating children's sugar intake.

I went to my granddaughter's daycare Halloween party today. Lots of Disney princesses and super heroes. Sofia was Belle. She looked adorable and so did her friends. One of the little boys who has recently been in big trouble at daycare for calling other kids names like "buttface" was some kind of super hero I'm not familiar with, but his spandex costume had built in muscles and an airbrushed design of muscle definition. The sight of this tiny little Schwarzenegger running around yelling "Trigger Treat!" was, frankly, hilarious. The little girls held hands and danced around, twirling their filmy skirts. They ate cheese sticks and apple slices and baby carrots.

We didn't have a single "trick or treat"er at our house. The holiday has changed a lot, but I am glad that little kids still have a chance, once a year, to wear a costume. That is, by far, the best part. Always was.
Posted by Terry Grant at 11:14 PM