I'm not that disheartened

Not so much that I would ignore the blog. Sorry if I gave the impression that I was retreating from all Internet endeavors. No, just not posting to lists full of nincompoops with a bone to pick. Let them argue over what they think is appropriate to discuss, then discuss it and then decide whose opinion was appropriate and whose wasn't and whether it is worse to post something crabby to the list or worse to object to someone else's crabby post and then dissect the meaning of the word "crabby" and so on and so on. You have probably all heard or read the old joke about how many listserv members it takes to screw in a light bulb. (See it here in case you missed it) It's funny because it hits so close to home. But YOU people here in the blogland section of the Internet— you are lovely people and just keep saying things that are just way too nice. So thanks, and please don't turn on me. I really couldn't deal with it.

Now for some good news. My quilt "Baños" was accepted for Art Quilts Year XVI: Something to Say at the Visions Art Gallery in Chandler, AZ. This is the first time I have submitted something for this show and I am really happy. It is a real art gallery show and I have heard such good things about it. 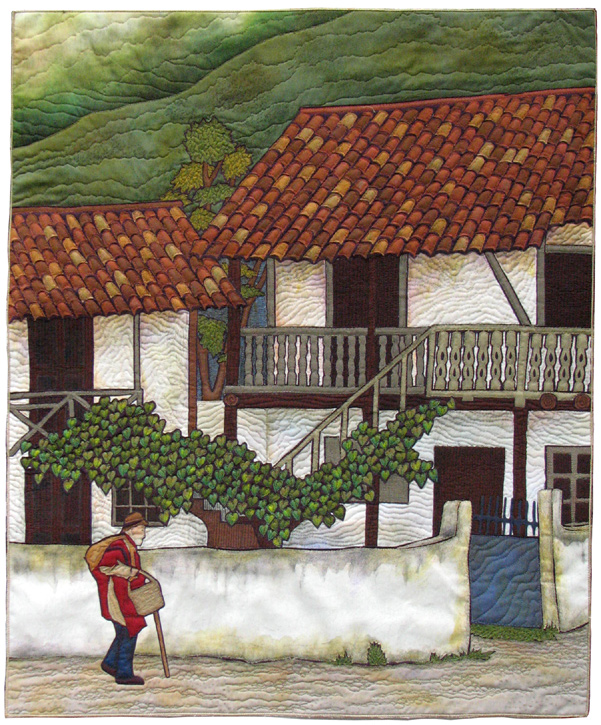 Baños is a town in Ecuador that is famous for its hot springs. If you have studied Spanish, you will recognize Baños as meaning "baths." It is a beautiful, touristy little town at the base of Tungurahua, an active volcano and it seems to get evacuated every few years when the volcano acts up. We spent several days there several years ago and I took a photo of an old house with a most amazing vine growing on it. The photo was the inspiration for the piece.

My day is always brightened by the presence of my grandchildren. Four-year-old Sofia is developing a pretty sharp sense of humor. We spent part of the day today reading "Knock, knock" jokes online. Our favorite, by far:

Feel free to use that joke. Trust me, it goes over really well with 4-year-olds even though they have no idea who Tom Sawyer was.
Posted by Terry Grant at 11:29 PM