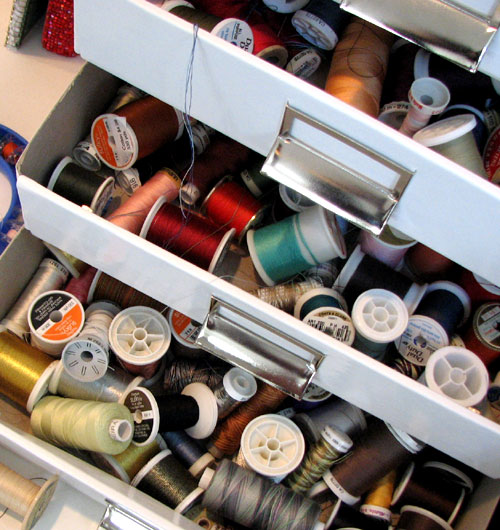 Something has happened in the past, maybe, five or six years. (Or maybe it has been longer and I just haven't been paying attention.)  Among quilt artists thread has gone from being a basic staple of our supplies to gourmet. Special. Trendy. Expensive! I have to admit I don't quite get it.

Backing up. I have been sewing and buying thread for at least 50 years. Really. And a few of the spools in the photo above may go back that far! I learned a long time ago that one must buy good quality thread. That stuff that is in bins and sells 3 for $1, or packaged on a card in the grocery store, will not do. It is lumpy and it breaks and it tangles unreasonably. I am partial to a good, long staple cotton mercerized thread, but a cotton-wrapped polyester works in a pinch. I have dabbled in shiny rayons and metallics and variegated threads (bottom drawer in the photo above) but those are not my go-to everyday threads. My everyday thread is what I have always considered "good" thread.

Suddenly, it seems, my old standby brands are considered inferior and there are new companies now out there selling superior (pardon the pun) threads that are at least triple the price of what I have been using for fifty years. How are they better? Less lint, they say. Stronger, they say. I have never been aware of a lint problem, nor have I suffered from weak threads causing damage. I suppose, though not with great conviction, that they may be technically superior, but I'm not sure how good thread needs to be. It needs to do a job. My thread runs quite beautifully through my sewing machine. It provides the strength I need and it holds my work together as I expect it to. I don't ask much more from thread than that. I would rather see the texture it creates than the thread itself.

I know many art quilters feature the thread, by using shiny, or sparkly or thread that changes color as you sew, but those aren't the special threads I am talking about. I am talking about regular old, utilitarian, unobtrusive cotton thread.

I left our local SAQA meeting last week, after a long thread discussion, very depressed. I was ready to come home and trash my entire thread collection, until I had a little time to think about this. I have a feeling we quilters are being "upsold" by all these new thread companies. I'm skeptical. I think some things can be "improved" beyond what they need to be just to provide consumers with the belief that they are getting something better. One person at our meeting said she was now spending more on thread than on fabric. Crazy.

I'm pretty sure I will get some feedback. Please—tell me what I am missing.
Posted by Terry Grant at 11:59 PM