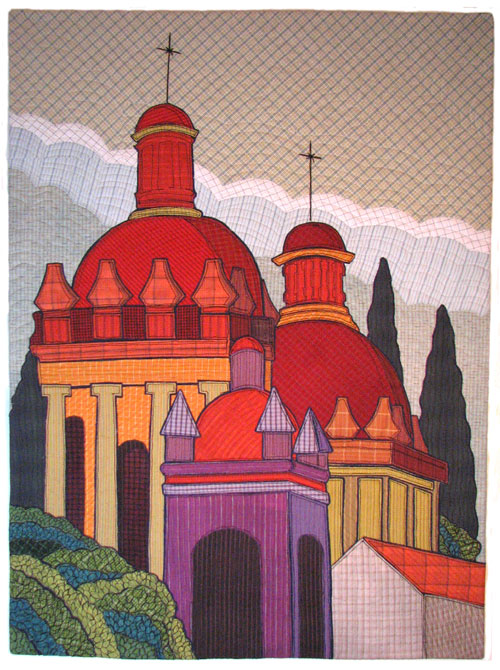 I finally photographed this quilt! And it is not a great photo—seems a little hazy, but OK for web viewing I think. I will take a better photo later. I think gremlins come in and mess with the settings on my camera. Yeah, that's exactly what I think happens.

I loved making this piece. It is not perfect, but I won't point out its flaws, because even with them, it expresses what I wanted to express. It is based on a photo, but it is a fantasy. A few months ago I decided I was done with realistic colors. I had so burned out on green and sky blue and brown. Time for a little "if I ruled the world..." So here is a pretty sedate basilica, all dressed up in new plaid clothes. Somebody asked me if it was in Russia. No—Mexico.

I have been thinking this would be good to submit for the High Fiber Diet "Simply Red" show. I went to HFD tonight and there was discussion about that red theme. "Does it have to be all red?" someone asked. "No, but it should read red" was the reply. Then we all got a little hilarious wondering how boring it might be to walk into a show where every piece was just red. I guess it will be up to the jurors to decide if "Red Domes" reads red. Seems like red is a pretty big theme, and it will be more interesting if everyone kind of dances around the idea of red rather than making 50 visions of hell, but I'm not a juror. We shall see. Can you see this in a red-themed show?

It is always a decision whether to post quilts that will be submitted to shows on my blog. In fact it has gotten to be a real bone of contention with blogger/artists. Some shows will not accept work that has been "published" and a blog is a kind of publishing. Pooey, phooey, phooey! That is such a pain. My blog is here to show my work. I guess if I ever think I may have a chance of being accepted into Quilt National, who are the most adamant about the no publishing rule, I will hold it back, but really—fat chance. So enjoy. (But don't ask me if there is a pattern available. No patterns. No.) But I do know that someone will ask how big it is. I don't remember. Maybe 2' by 3' give or take?

And just for fun, here is the photo that was the inspiration. The Basilica of Santo Domingo in Oaxaca, Mexico. 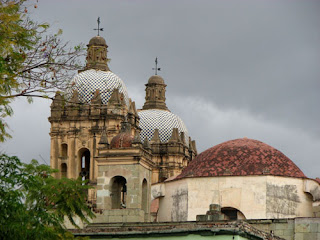 Someday I will do this again and make the domes black and white checkerboards, which were really pretty cool. And don't you think they should plant some cypress trees next to the basilica?