So here we are, ten years later. This was me 10 years ago. I wonder what happened to that shirt. I really liked it. And I was still wearing contact lenses back then. Otherwise, not too many changes.

This is where I sat, in my wonderful old house on Illinois Street, the night I decided to create a blog. The house is different and I have gone through a couple new computers since then. iPads hadn't yet been invented and tonight I'm using my iPad to write this post. 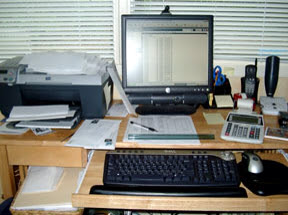 I have been looking back and reading old posts this week and marveling at all that has happened in ten years, and amazed and grateful and just confounded by the friends and opportunities and wonderful moments that have come to me through this blog in the past ten years. Honestly, I expected nothing. What I got has been huge. Awhile back a friend was going back and forth about starting a blog. She said to me, "your blog is great and all, but has it really proven to be an asset to your art career?" And my answer was that it has been everything that brought me an art career at this stage in my life. And so it goes...

Of all my yearly musings on my blog anniversary, this is the one I liked best. Written on the seventh anniversary:

Seven years ago tonight I sat at my computer, wondered how you set up a blog and followed some links down a rabbit hole. I came out the other end as the new owner of a blog called And Sew it Goes, which I have to explain is a name arrived at through desperation. Every other name that popped into my head had been taken, including my own name. I remembered that in the early days of the internet when I joined my first quilting listserve I used to add that line to my posts. The internet seemed so anonymous and I was having trouble keeping people straight on the list. The tagline seemed like it might be something memorable to distinguish me from the faceless multitude. I now regret using the cute "sew" in the line. "And so it goes..." says better what I intended, but of course that was the line associated with Linda Ellerbee the wonderful journalist. Also a heartbreaking Billy Joel song and a refrain in the Kurt Vonnegut book, Slaughterhouse Five. But there it is. And now, seven years later, I am still And Sew it Goes.

I had no idea what this blog would become for me. It is, first and foremost, a journal of my past seven years. The only journal I have ever kept. It didn't occur to me that it would engender a community of friends and open up opportunities never anticipated. I can't imagine coming to a place where I have nothing more to write about. I know it is probably the height of self-absorption in some peoples' eyes, but it is something that I now love so much that it doesn't matter to me.They say that life happens in seven year cycles. They say that every one of our cells is replaced in the space of seven years. So, the new me wonders what the next seven years will bring. You know where you can find me.And so it goes...

Posted with Blogsy
Posted by Terry Grant at 10:31 PM