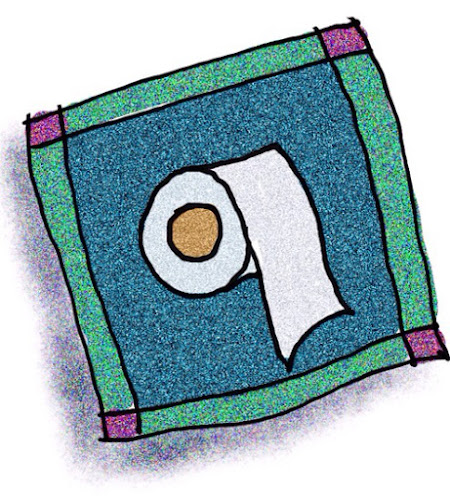 We made a quick trip to Boise at the end of last week, mainly for Ray's 50th High School reunion, but we also spent time with relatives, I went to a quilt show, saw all that is new in Boise since we lived there and revisited what we loved, and still remains, of the city we remember. A sentimental journey in lots of ways.

The quilt show was put on by the Boise Basin Quilters guild and two of my favorite young, quilt artists, Lisa Flowers Ross and Kathleen Probst, were the featured artists. I walked the show enjoying the exquisite traditional quilts, as well as some bright contemporary quilts, and most of all, Lisa and Kathleen's bold, clear abstract art quilts. Each, in her own way, has explored the possibilities of simple forms, complex color and transparency, creating exciting work that really elevated the show. I was drinking in all that, plus the richness of tradition and craftsmanship in the rest of the show, then I saw something that stopped me short. In a vendor's booth a quilt and the pattern to make it, consisting of four quilt blocks, each depicting a slightly different view of a roll of toilet paper. I was dumbfounded, and I snapped a picture with my phone.

Walking to my car I kept thinking about why that quilt had so shocked me, and I posted the photo and my reaction to Facebook. Comments started rolling in. Some just didn't like the idea of making "art" from kits or patterns. Some expressed a distaste for the subject matter. One commenter defended it as "fun" and wondered why art had to be serious and a couple seemed to think I was attacking someone's personal expression in a rude or condescending way coming from someone who should be supportive of a fellow artist, while others dismissed it as "not art."

Only my friend Jeri seemed to understand that it was really time that I was reacting to. Events of recent years have made me acutely aware of how precious time is, and I have, more and more, pondered how one uses the limited time each of us is given. I have come to abhor busy work and mindless time-wasting. I hope I don't sound morbid or overly earnest. I want to relax and be entertained and have fun (though I still fail to understand why a toilet paper quilt is fun) as much as anyone, but I know full well what goes into making any quilt. When I expend my resources, including money, skill, emotional investment and time, I want it to be meaningful, and I could not, hard as I tried, coax any real meaning from that little quilt. My reaction turned to a little sadness that there are people who so little value their own time on earth and the skills they have worked to achieve.

I have been accused of overthinking in the past and this might be what I'm doing here. Things like school reunions and nostalgic weekends in an old home town will do that. I know I probably should not be concerned with how anyone other than I, myself, chooses to spend their time and energies and usually I'm not, and really this time I'm not so much concerned or disapproving as I am simply confounded.

And the tomato soup? 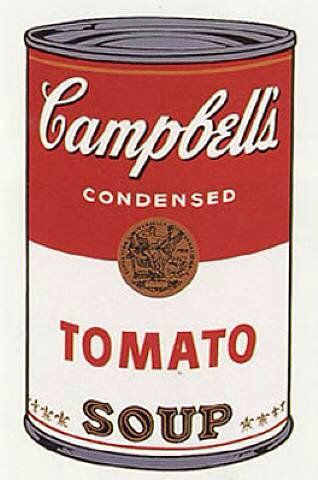 Several commenters mentioned Andy Warhol and his soup cans as somehow similar to the toilet paper quilt. One said, "how is this different from Warhol's soup can?..." Poor Andy. He has come to represent, for many, art that is so simple-minded that if a can of soup is art than anything can be. I rather love those soup cans myself, and find a lot of sly meaning to be found there. How many people know that he did not paint just one big tomato soup can? The original exhibit was 32 separate Campbell's soup paintings—one each of the 32 varieties Campbell's made. They were exhibited all together, side by side around a room in a galley—iconic in their style of presentation. Initially 3 were sold, but the gallery owner quickly realized that they were a set—complete only as a whole—and bought the 3 back. They have continued to be exhibited only as a group since. How does one view them? Icons of popular culture? A comment on the power of advertising? Beauty in the everyday object? When asked, Warhol said he chose soup because he liked soup and had eaten it for lunch every day for 20 years. So, now do you maybe see parallels in art and nourishment? Warhol went on to make many more variations on the soup can—large, very grand cans; soup cans as a repeating pattern; cans with the colors changed. A roomful of these pieces becomes a dizzying contemplation on the very nature of the manmade image, which can become entirely divorced from its original meaning. What has that image now come to represent? Simple nourishment? capitalism? the Pop Art movement? or something else? I'm probably overthinking again, but I think comparing Andy Warhol and the toilet paper quilt is a stretch. I don't think I'm buying it.

Thanks for reading all this. If you've hung in here you probably want to see that TP quilt that got me so agitated. I decided not to publish my photo without permission from the maker, but here is a link to the original pattern:

Draw your own conclusions.

Posted with Blogsy
Posted by Terry Grant at 3:33 PM