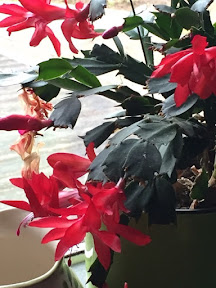 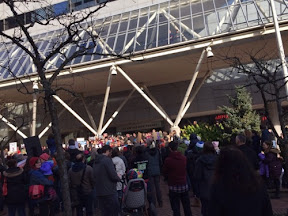 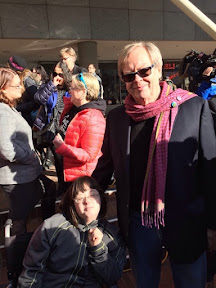 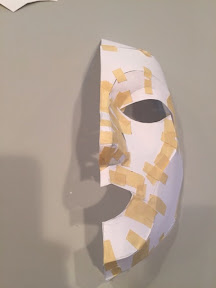 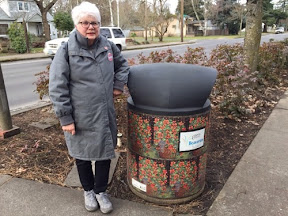 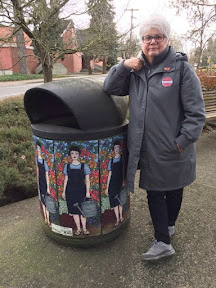 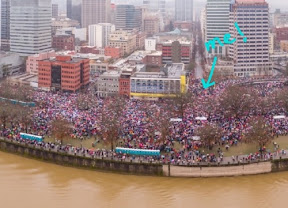 Were you there? Were you there in Washington, or Portland, or Chicago, or Pocatello? Were you there in your heart or your imagination? I was there in Portland and I felt you all—all across the country and, indeed, around the world. And that was the great thing—just being there. More than four million people worldwide, 100,000 in Portland, showed up to support women's rights, specifically these, and to denounce the threats the Trump presidency has expressed against these rights.

Ray, daughter Emily, granddaughter Sofia, friends Jeri and Ron, and I boarded a train, already filled with Marchers, into Portland in high spirits! 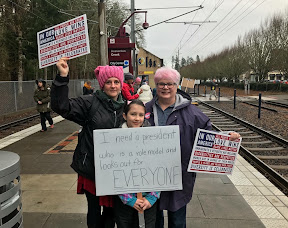 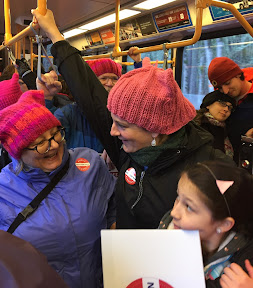 We had our signs and Emily and Jeri had knitted their pink hats (not a hat wearer, I colored my hair pink for the occasion).

We blended into the massive crowd near the Portland waterfront. The sky was dark and rainy, but no one seemed to notice and the mood was upbeat and celebratory. News helicopters flew overhead as the crowd cheered and waved. 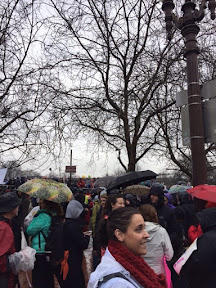 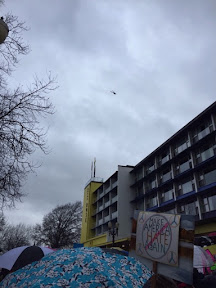 Soon we were marching, filling the street from edge to edge, chants or singing would arise from the crowd and we would join in. At intersections we could look to our left and our right and see the mass of people, ahead and behind us in the great procession we were in, winding through our city. It looked endless in all directions.

I have read angry messages online, by those who opposed the March, characterizing the participants as "angry feminists", "vulgar", "topless", "profane", "smelly", "tattooed and pierced"... What I saw were passionate young people, families, children, black, brown and white people, grandmothers and grandfathers, tattoos and piercings, disabled people, babies sleeping in strollers, smiles, excitement, humor and fervor. People were exceedingly courteous, looking out for each other, and especially the children, greeting the police with smiles and friendly waves (which, by the way, were returned by the police.) Despite rain and cold feet and crowds, there was a warmth of companionship and the recognition of kindred spirit. 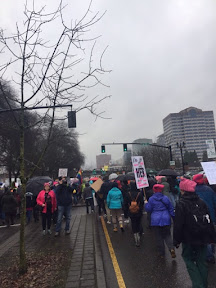 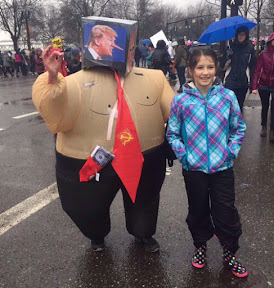 Near the end of our route we passed three little girls, standing together on a curb, gleefully calling out, "Show us what democracy looks like!" And the passing crowd would roar back, "THIS IS WHAT DEMOCRACY LOOKS LIKE!"

I will remember this forever and I hope my granddaughter will too. This video captures some of the spirit of Saturday. It was powerful. This is what democracy looks like. Onward! 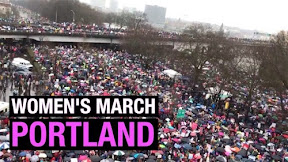 It is winter here in Oregon. Crazy winter. Not like Portland winter—like winter winter. It actually started way back before Christmas with an ice storm that ripped through and, among other things, forced our STASH group to cancel our annual Christmas go-to-a-fancy-restaurant lunch. "Oh well," we said. "We will reschedule in January." So we did—for last week, on the day the huge, big amazing snowstorm arrived and shut down the city. Then it got so cold that the snow didn't budge until today. We have rescheduled our lunch for February, knowing full well some weather calamity is sure to materialize on that very day. My basket of Christmas gifts for my friends is looking a little forlorn at this point.

The snow was beautiful. Really, it made me very happy for a day or two there. 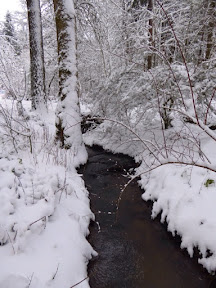 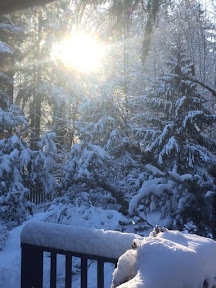 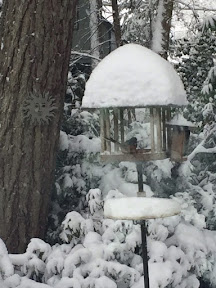 I stayed in pajamas 'til noon, drinking coffee and watching birds at the feeder, then waded through the crystalline snow to the studio every afternoon. I have gotten so much done this past week! Unfortunately I am working on a project that I cannot show in progress, but I can't resist giving you a tiny little peek at a tiny little part. 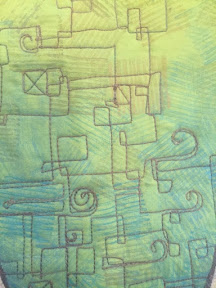 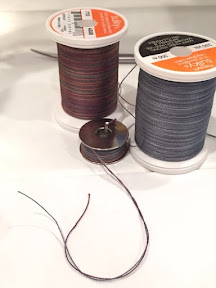 That's my doodle-y stitching, which I wanted, not black, and slightly thicker than usual, so experimentation got me to the idea of stitching from the back with double bobbin threads. Believe it or not, it worked and I love the look of the combined variegated threads I'm using. So, it has been a productive snowed in week! But cabin fever set in a couple days ago, and I was sick of crusty, icy snow and cold feet and not being able to leave my house, and, oh, did I mention that back somewhere on one of those icy days my son slipped on the ice and broke his arm? And my darling grandchildren had missed something like seven days of school and were at each other's throats, driving their parents batty— so the change in weather today was cause for celebration. It has warmed up and raining buckets, melting all that snow. The creek is overflowing and they're worried about the rivers, but I got out to the SAQA meeting this morning—the first event in a month that wasn't cancelled due to weather. So good to talk to others, not my family! So good to drive without fear for my life! And everyone went back to school and work.

I know. This weather is nothing. Many of you are still buried in snow and will be for weeks to come. Some of you are huddling, in the cold, by the light of your iPads, waiting for the electricity to come back on. But we are delicate Oregon flowers who rarely have to experience winter and we nearly died! I don't know how you do it out there in Minnesota... 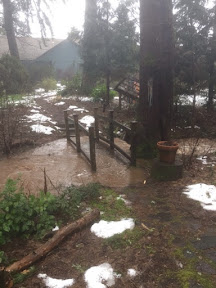 And the creek keeps rising...