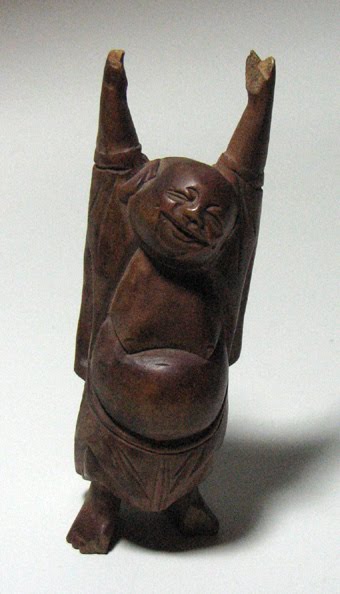 When I was growing up, we had in our house, a small carved wooden figure of a fat guy throwing his hands in the air and smiling broadly. He was only about 6" tall and moved from place to place, usually sitting on an end table in the living room. My mother called him "Ho Tai" and told me she and Dad had bought him on their honeymoon as he was purported to bring luck to a household. I'm sure he didn't cost much. Somewhere along the line our family Pekingese got hold of him and chewed off parts of his hands and feet, but Mom kept him around and he was a continuing presence in our home, battered though he was.

When Ray and I got married we were living in Boise and I loved to poke around in the antique stores and secondhand shops there. We were furnishing our first apartment and they were good sources of inexpensive, quirky things that I liked. One day I was browsing and stopped short. There, on a shelf, was my mother's Ho Tai figure. It had to be. I knew it as well as I knew my siblings. The hands and feet were damaged exactly as I remembered. I was stunned to see it there. How had it gotten there? It was priced for a few dollars and I quickly purchased it and took it home. A few weeks later my parents came from Pocatello for a visit. My mother soon spotted the little figure and she whirled around, confused and a lttle stern. "Why do you have my Ho Tai?" she demanded. I told her my story and then we were both confused. We both agreed it had to be hers, but it couldn't be. She was pretty sure hers was still at her house in Pocatello. Then she began to ponder all kinds of scenarios. Someone had lifted it from her house and it ended up in the secondhand shop. It had been accidentally included in some items donated to Goodwill. Neither of these seemed plausible however. When she got home she called me. Her Ho Tai was sitting in the same spot on a shelf in the living room where it had resided for years. Mine was its doppelganger. The next time I went to visit Mom and Dad I took my Ho Tai along and we put ours side by side. The differences were very, very slight. Even the damage was nearly identical. I suppose there are thousands of these little guys out there.

Ho Tai is the Japanese name for Budai, a Chinese Buddhist monk who lived in 10th century China. He is a beloved figure and sometimes called "the laughing Buddha" though that is a misnomer as he is not a representation of Buddha at all. Folklore says that rubbing his belly brings good luck. He makes me smile—for all kinds of reasons.
Posted by Terry Grant at 12:59 PM