And inside the tureen... 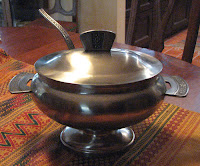 Saute vegetables in butter until clear, but not browned. Blend in flour, dry mustard and chicken stock; cook 5 minutes. Blend in cheeses and beer. Let simmer 10 minutes, season and serve with French bread and salad.

I have made this with many kinds of beer. The flavor changes a bit depending on the beer. Thursday's version was made with a bottle of Fat Tire Ale. Also, the recipe calls for an 11 ounce bottle of beer. Around here beer comes in 12 oz bottles, so I generally just use the whole bottle and increase all the other ingredients just a little bit. You can, of course, make the recipe as written and drink the extra ounce of beer! I put the beer in and let it simmer the 10 minutes or so to cook out the alcohol, but I add the cheese at the end and serve as soon as the cheese is melted. I find that if it cooks very long after the cheese is added the cheese separates and gets stringy. That's probably why the original recipe calls for processed cheese, but—yuck!  I don't like processed cheese. I added no salt to the soup. Respecting the preferences of our three vegetarian members, I used Better than Bouillon vegetable stock, which seems pretty salty already. I have to say it is delicious, however—so much better than canned vegetable stock, which I think tastes awful.

I also have to tell you that I had soup left over from our lunch on Thursday, so I reheated it for Ray's and my dinner last night. Reheating does weird things to the cheese. It clumped up into chewy wads of cheese in the soup. Not terrible and definitely still edible, but not the texture you really want. So my advice is make it and eat it all!
Posted by Terry Grant at 5:11 PM