How does this happen?

I wonder how ancient man decided to create art. Was it something that was always in us? Or did someone invent it, like they did the wheel? My painting professor, in college, said he always imagined that two cave guys were sitting around the fire one day and one of them picked up a rock with three dark spots on it, and said, "look, Lou, this looks kind of like a face, except it needs a mouth." So Lou picks up a partially burned stick from the fire and scrawls a mouth on the rock, below the spots that already look like two eyes and a nose, then he adds a couple of eyebrows just for emphasis and the rock has become a face. Lo—art was born. It could have happened that way.

I can't remember when I didn't draw. I can't remember when my granddaughter, much more recently began to draw. She was pretty young. At six her drawing is pretty sophisticated and is most often  her formula for "princess" which includes eyelashes and elaborate hairdos and very detailed clothing, but sometimes I think she is tapping into something more primitive and elemental. This. 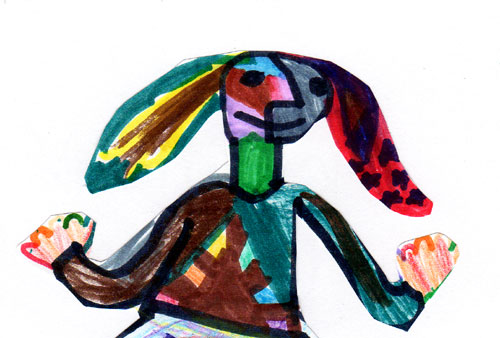 This face is astonishing to me. I looked at that and wished I had that kind of eye. I am in love with that face. And just to be more clear about it: 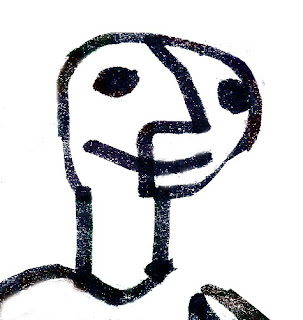 Sometimes I think most of us are trying too hard.
Posted by Terry Grant at 12:01 AM