On the Oregon Trail

Last week Ray and I went to Pocatello, Idaho where I grew up, to help celebrate the 90th birthday of one of my favorite people. It's a long drive, but we get back to Pocatello almost yearly, and I have to say I appreciate the beauty of the place much more now than I did as a child. The city sits in the Portneuf valley near the Portneuf Gap—an opening between the surrounding mountains where the Oregon Trail came through the mountains in the great western migration. In fact the highway we drive between Portland and Pocatello follows the route of the Oregon Trail all the way. As we drove home, earlier this week, I thought about what the trail pioneers were seeing as they traveled this last leg of that great journey. It is a vast, barren desert across southern Idaho and into eastern Oregon—a pretty discouraging place if you want my honest opinion, but then there are grand surprises, like the Snake River canyon and Shoshone Falls, near Twin Falls. Imagine stumbling upon this out in the expanse of flat sage-covered desert—but of course the bridge and the golf course weren't there yet... 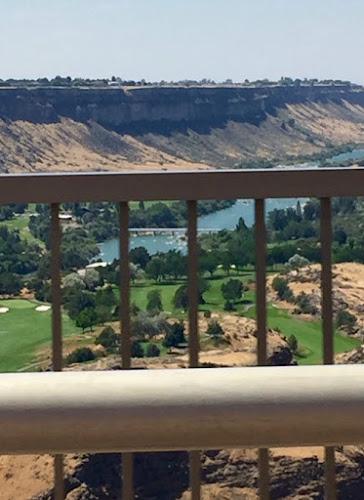 When I posted this photo on Facebook last week a friend recounted a story of sitting in traffic on this bridge years ago, and watching, in horror, as a young man appeared on the roadway, placed a rose on that railing and then leapt over the rail to his death. Horrifying. Not the first death along the Oregon Trail. I have read a lot of excerpts from diaries kept during the migration years of the trail and was stunned by how many entries were simply, "passed 8 graves today..., " "passed 3 graves near the Snake River..." and repeated day after day. My great-grandmother came, as a child, with her parents, to Oregon on the Oregon Trail. I often think about that and try to imagine it. Years back I had surgery to have my ruptured appendix removed. As I was lying in my hospital bed recovering, the thought suddenly came to me— if I had been in a wagon coming west when this happened, I would now be in one of those graves alongside the trail. We probably can't really imagine just how hard that journey was.
Passing into Oregon, the scenery doesn't change much until you get to Baker City, one of the old pioneer towns along the trail, in a wide green valley, with a view of the Wallawa mountains in the distance. 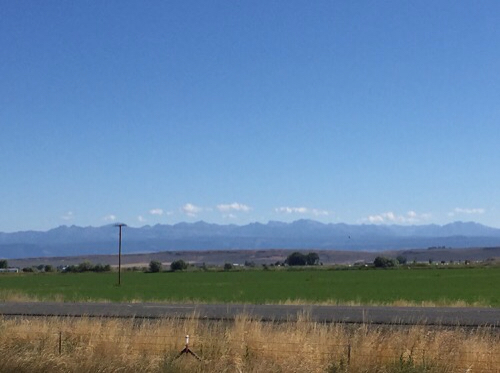 Baker was our halfway point between Pocatello and Portland and we treated ourselves to a night at the historic Geiser Grand Hotel, in Baker City's charming, well-preserved historic downtown. 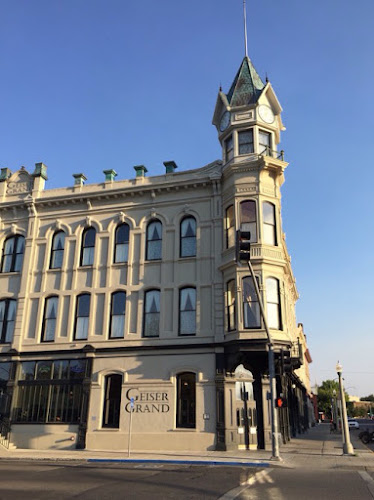 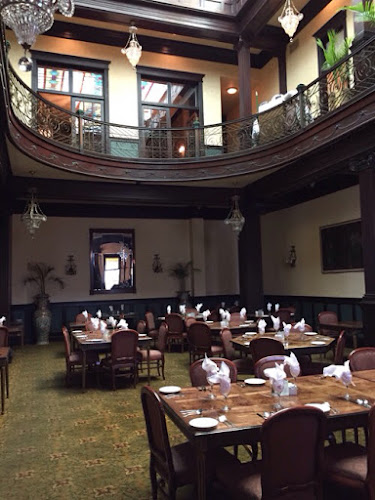 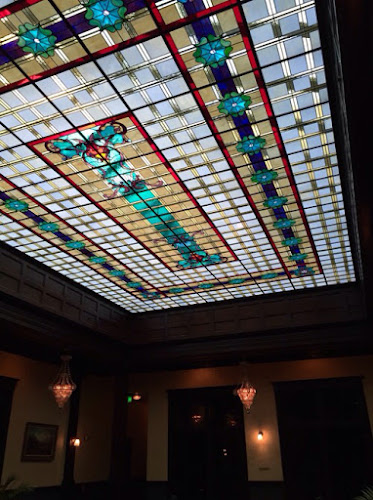 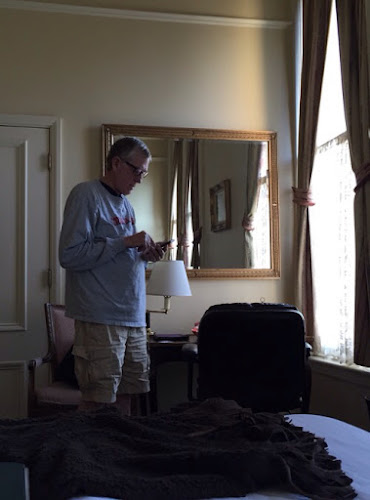 From there we headed into the Blue Mountains, which were treacherous for the wagon trains, especially in winter. Even now we are wary of driving through "the Blues" in late fall and winter. This time of year the drive is beautiful and in summer must have been a welcome relief from the desert for the pioneers, despite the difficulties of the terrain. 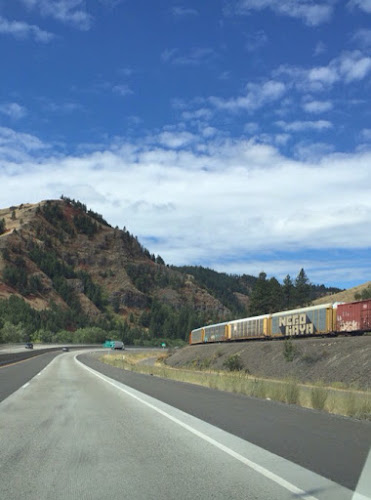 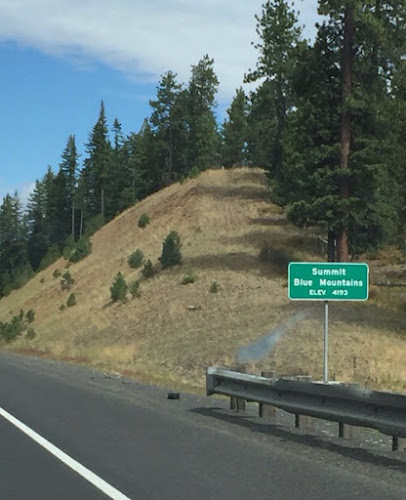 Coming down from the Blue mountains the land returns to desert, flat and desolate for many miles until you hit the Columbia River. 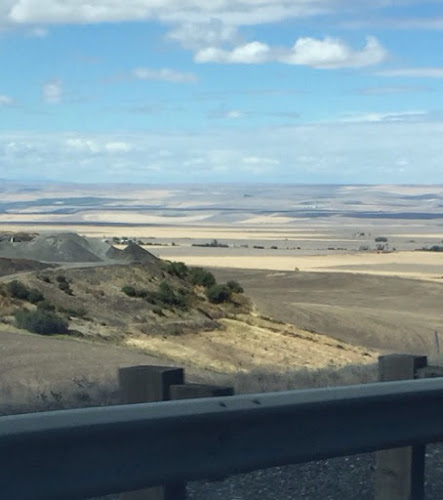 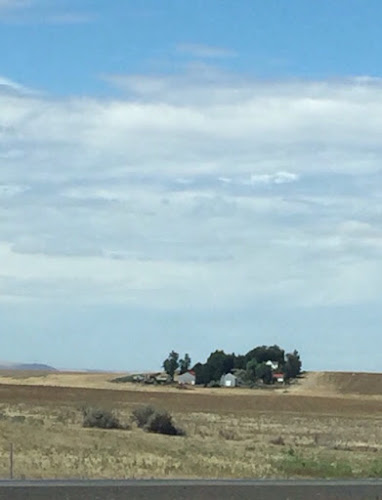 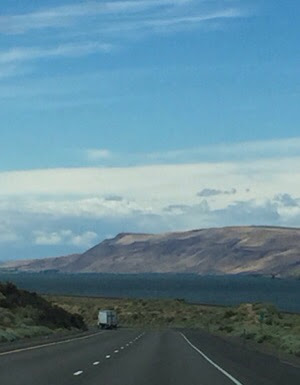 There you head into the Columbia Gorge, which slowly turns from brown, treeless slopes into wet, misty forest, tall, rocky cliffs and magical waterfalls—the promise of a new, fertile and verdant land that drew all those tens of thousands west. And I always feel what those pioneers must have felt when those cliffs come into view—almost home! 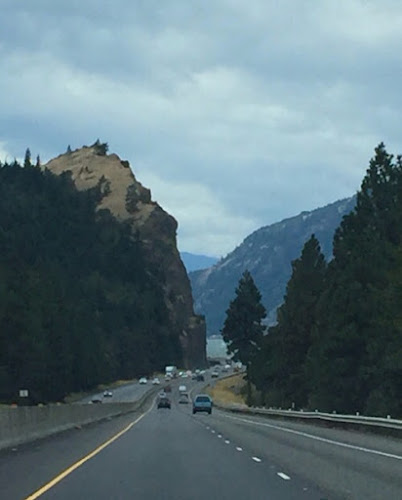 It was a fine trip. I spent time with old friends, dear family and visited my old neighborhoods, filled with great memories. Richard Neuberger, a former senator from Idaho, wrote a book called "They Never Go Back to Pocatello." But some of us do. We follow the old, hard-traveled trail back and forth. I suppose I always will.

Posted with Blogsy
Posted by Terry Grant at 9:15 AM