What's in, what's out

I am getting 2 quilts ready to submit, for consideration, to our next High Fiber Diet show, and 2 more for the Beaverton Art Mix show, and have been juried in and out of 3 more shows in the past couple of weeks. It's a nerve-racking season! Getting in is great, not getting in is kind of lousy and demoralizing despite the reasons and the rational knowledge of the odds.

First the good news. "Luna Moth" will be in the Dinner@8 show called Personal Iconography which will debut at International Quilt Festival in Houston in November. I'm very happy. I chose an image that could show off the kinds of elements that have become my own personal marks and stamp—my overdyed shirt fabrics, my doodle stitching, dark outlines and painted elements. 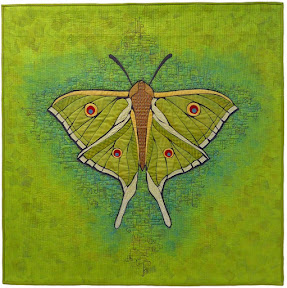 Not making the cut were my entry for Threads of Resistance, called "Stronger Together", which was my comment on immigration and my sincere belief that our country's diversity and foundation in immigration is what makes us strong and open and tolerant as a culture and as individuals. Honestly, I am not satisfied with the faces, and there were hundreds of entries for a limited number of slots, so I can't be too upset. I'm glad I made it and wish I were happier with it. 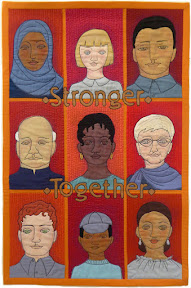 And my entry for Oregon SAQA's Bridge exhibit, called "Build that Bridge". Okay, I knew from the outset that this was really a long shot! While the call allowed for 3-dimensional work, I was pretty sure this would be seen more as a doll than a figurative sculpture. Then, too, I was really pushing the Bridge theme. Love is a bridge? Maybe. So, why did I go this route? Because this was what I was wanting to make at the time. Nothing ventured, nothing gained. No regrets. Still, I would have been really happy to have her as part of that show! 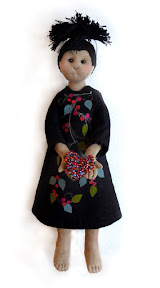 So, one out of three isn't bad, and Luna Moth is the one I would have chosen if I thought only one of them would make it.

Now back to the next round of entries...