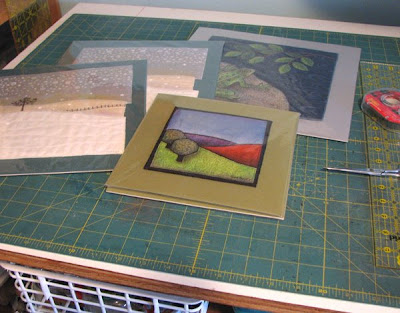 Of course it started, probably as did most of yours, with the news that Farrah Fawcett had died. Sad, but really not unexpected news. I watched most of the "Farrah's Story" show on TV a couple months ago. I am a not unwilling sucker for celebrity stuff—not proud of that, but there it is. I was really quite moved by her dignity and how down to earth she seemed. I've not been quite so impressed by Ryan O'Neal's public blubbering and melodrama, but OK, I am sorry for his loss.

Off to the Red Cross to give blood. This is routine by now. My young phlebotomist, however, could not seem to find a suitable vein in my left arm, so we turned the chair around and she went to work on my right arm. She poked, she rubbed, she squeezed, all the while yammering on and on about how much she loves ice cream and it should be a food group in itself. Finally she marked a spot, double-checked it, slathered it up good with iodine and slipped the needle in. It went right in, with no discernible problem and just a tiny sting. But she exhaled loudly and exclaimed, "Whew! I was worried about that one!" This does not inspire confidence. Just as I was finishing up, a woman was ushered in to the chair next to mine and as she settled in she pulled a huge wad of tissues out of her purse and said to her phlebotomist, "I'm a crier. I always cry when they stick the needle in. Don't take it personally." Fortunately I was finished and didn't have to stick around for the waterworks.

I made a quick stop at SCRAP, which is near the Red Cross and found the pickings rather slim, but picked up some foamcore scraps, which will be handy for use as packing materials for some things I plan to mail.

When I arrived home I checked my email and Facebook and first read some very good, very exciting news, that I can't yet share here, but will in time. Then the news that Michael Jackson had died. It seemed like it had to be a hoax—but no. Gosh. When my kids were young I felt like MJ lived at my house. We were all new to MTV and were simply in awe of his videos. The kids played his records for hours on end. Emily and her friend, Kristen, invented dance routines to his music. And I was still remembering how adorable he was as a little singing, dancing cherub with his brothers in the Jackson Five. With all the great music he made, all the stunning visual images and performances, this is the one that keeps going through my head. Poor Michael. He became such a wierd guy, but oh what a talent.

Then on Facebook, several people reported the news that Jeff Goldblum had been killed in a fall. What!? That one was a hoax. How cruel. Imagine his friends and family reading such stuff on the internet.

I listed several more items on my Etsy shop yesterday. The birds have been selling well! The photo at the top shows several small fabric art pieces I photo'ed and listed. They are mounted on matt board. After I photo'ed them I wrapped them in clear cellophane to protect them.

Went to a PEO meeting last night, where there was much laughter and warmth. The business part was short, so we lingered over a decadent dessert and a visit. Nice to share the end of a busy day with friends. Driving home I noticed the beautiful crescent moon hanging above the trees in a deep, velvety blue sky and felt like this had been a day!
Posted by Terry Grant at 9:47 AM