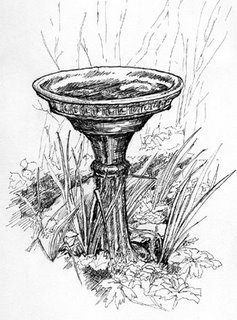 When we redesigned our yard last year we went a little nuts for garden art and accessories. We saw this birdbath at a fancy-schmancy garden store and fell in love with it. It was 40% off, because the store was closing, and still probably more expensive than it should have been, but we loved it and so we took it home. One day my friend, June Underwood, came to my house to draw and we sat outside in the sunshine and I drew my lovely birdbath. I watched it through the late summer and fall as the birds flocked to its loveliness.

One day this summer Ray came into the house with a stricken look on his face. I thought something terrible had happened--I mean really terrible. "I broke the birdbath" he moaned. Tipped the bowl up to clean it and lost 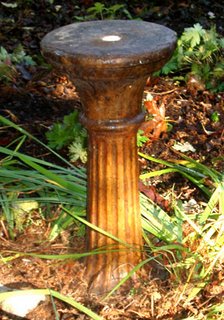 control of it. It smashed on the ground.

I searched in vain for a replacement. After disappointing visits to as many garden centers as I could find, in desperation I googled "birdbath Portland" and discovered A-1 Birdbath on Division Street. "Factory prices since 1942". I went right over. They had many, many birdbaths, wonderful birdbaths, and the owner, Stefan, was willing to sell me just the bowl. The problem was that most birdbath bowls are rounded on the bottom. I needed one that was flat to sit on the wide, flat top of the surviving pedestal. I found a nice plain bowl that I liked, but it was also rounded on the bottom. I explained the problem to Stefan and he said "I can make for you with flat bottom". So he did--for a very reasonable price. I now have to try to stain it to match the nice antique-y brown color of the base. I think I will tackle that this afternoon. I'll let you know how it works out. 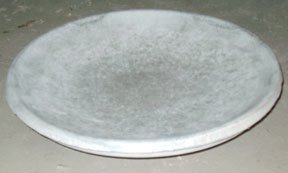