Do you love movies? I really do. Last night we watched an old favorite, Cinema Paradiso. 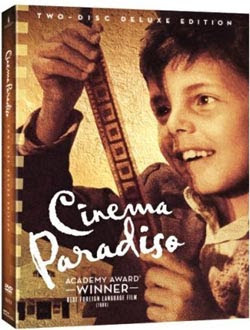 It's an Italian film, made in 1989, but timeless really. It's about the movie theater in a small town in Sicily just after the war, and a little boy in love with the movies. I adore this movie and the characters of the town, like the town priest who screens the movies before they are offered to the public and demands that all kissing scenes be cut out of the film first. Toto, the little boy, of course, pockets as many of those snipped bits of film as he is able to get past Alfredo, the projectionist who befriends Toto.

The sweetness of this movie always makes me cry as I did, once again last night. It made me think about the old Chief Theater in Pocatello, where I grew up. I saw so many movies there as a child, including National Velvet and The Red Shoes, which was my favorite movie for so long. (So romantic—so tragic!) As a teenager everyone went to the Chief on Friday night and heaven help any adults who made the mistake of trying to see a movie on a Friday night. It was date night for those with dates and hangin' out night for everyone else, and frequently social pandemonium. One Friday night as I was watching a movie at the Chief, a pair of Levis was thrown from the balcony and landed on my head.

It was a magnificent theater, built in the late '30s, with murals of Indian villages and Indians in full regalia painted on the walls and soaring ceiling; and big carved oak doors, rustic chandeliers and red velvet curtains. When it was upgraded in the '60s my Dad was able to buy a set of the carved doors that they were replacing with modern glass doors. The "Chief" doors are still in use at the cabin. In the early '90s, during yet another renovation, the roof caught fire and the theater burned to the ground. My heart broke just a little bit when I heard the news. All that remains is the mosaic that is still in the sidewalk where the theater entrance used to be. 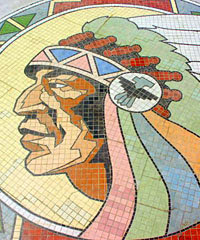 Did you ever love a movie theater for the big world it brought to your humble life or for sharing popcorn in the dark or necking in the balcony or seeing Dr. Zhivago or Gone with the Wind or The Wizard of Oz or The Graduate on that magical big screen for the first time? If you can relate, then I highly recommend that you rent Cinema Paradiso. Bring tissues.
Posted by Terry Grant at 9:35 PM