A little change of pace

We've been on a little trip this week. Emily took a class about teaching languages using storytelling techniques in Issaquah, Washington. We went along to take care of Sofia during the days Em was in class. Issaquah is only about 17 miles from Seattle, but we'd never been there. We liked Issaquah. You'd never know it from the boring city web site, but it is a lovely place, on Lake Samamish and surrounded by mountains that they call the "Issaquah alps".

We spent our days looking at the world through Sofia's lens. She reminded us to always stop to smell the flowers. 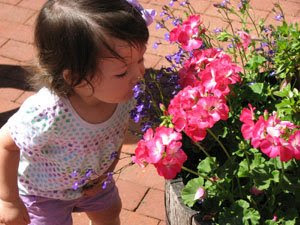 The flowers were at a charming shopping center called Gilman Village. It consists of historic homes and buildings from Issaquah's historic past that were moved to the location and repurposed as shops and restaurants.

After nap and lunch we located the hot spot for toddlers—the playground next to City Hall, with its Sofi-sized swings, slides and climbing equipment. 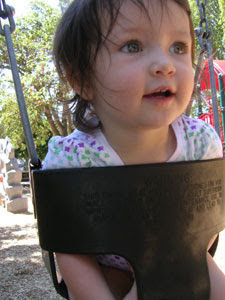 The best parts were watching the other kids, interacting a little and running on the grass. 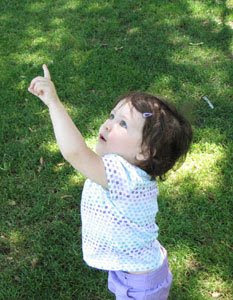 "I see a black bird looking at me." 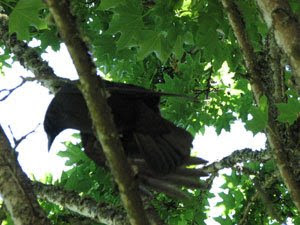 Sofia's current favorite book is "Brown Bear, Brown Bear." She has it in both the English and the Spanish versions. It was read quite a few times on this trip. I couldn't help but think about it when she spotted the black bird "looking at me". I wonder if she made that connection. Emily mentioned that she kept thinking about Sofia during her class, as the class presenter was talking about the natural ways that people can attain language. She said several times the presenter would say, "think about how a baby learns to talk." Sofia is just starting to use some words, mostly words that are the same in English and Spanish, as she hears both languages spoken. She says "baby" quite clearly and it applies to real babies, her doll, as well as cats and dogs! About a week ago as they were leaving our house, Emily said, "say 'bye, bye, Grandma.'" Sofia said, "Ba ba, Na Na" and then repeated it. She hasn't said it since.