Where does the time go?

Haven't posted since Wednesday. Thursday the STASH group met at my house. We had a lot of catching up to do since our annual Christmas/Holiday girls' lunch out was cancelled due to snow. Then the Christmas party at my house was pretty much a no-show (Beth came) because of weather, then I was too sick to go to Reva's for New Years Day Hoppin' John. So I've been missing my friends.

I was finally able to give them the coasters I made and there were gifts from them as well. We have not made it a practice to exchange Christmas gifts in the past, but for some reason everyone was in a mood to share a little something this year. 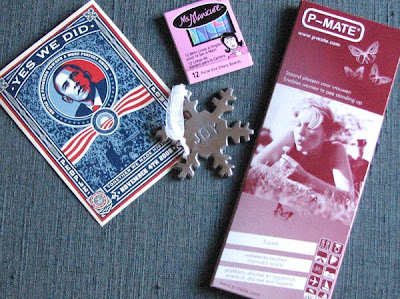 Reva brought me some of their hoppin' john and cornbread, (not shown in the picture) since I missed the party. Delicious and essential to a prosperous and successful new year. Gerrie brought each of us one of the wonderful Obama stickers, designed by Shepard Fairey. This is something to keep for posterity, I think. Gale brought us pewter snowflakes with the word "Joy" on it. How appropriate. I have been thinking about paying attention and appreciating moments of joy. It has been on my mind. Linda's gifts were practical and hilarious at the same time! The first was the little purse size packet of emery boards, actually totally practical and not at all hilarious. The second is the package of a product called P-mate—hilarious, but at the same time, something I have often wished existed! We will all be interested in a report from whomever among us uses it first.

I made lunch for the group and the cooking gods were not especially helpful that day. I decided to make Ecuadorian potato soup (Locro de papas), which I had described to the group, but never made for them. It is a basic, delicious potato soup with onions. You serve it with chunks of avocado and fresh cheese in it and pass popcorn to sprinkle in as you eat it. (This is what it looks like, except I don't add any green onions) Easy. That morning I boiled the potatoes, cooked the onions and just before everyone was to arrive, I drained the potatoes and poured in several cups of half and half. I tasted it to see if it needed salt and discovered it tasted weird—sweet. What the!?? Then I noticed for the first time that I had purchased "French Vanilla" flavored half and half. Screaming obscenities at the top of my lungs, I quickly dumped it into a strainer and rinsed the sweet stuff off the potatoes and onions. Ray, expecting that I had cut off a finger at the very least, came running and as soon as he learned what the ruckus was about, headed off to the store to get plain half and half, before I could even ask.

Before the soup disaster I discovered that the plantains I had bought to make patacones, another Ecuadorian treat, were so green that they could not even be peeled, so I ditched that idea and served bread sticks instead. The soup was salvaged, but overall I was having a seriously bad cooking day. Sigh. No pictures were taken.

I had a finished quilt to show the group, which was a good thing. Tomorrow I'll post a picture of the green line piece that I finished.