Thanks for all the  interest and suggestions for changing my big, ole quilt. You guys need to get together and agree on things before you post these comments, though! Some of you said "change the sky" some said don't. Some liked the added details—some not. These comments are always so interesting to me. The most helpful ones are simply comments about what you see. It is interesting that Sandy's comment about the arched windows needing something to break them up and Kat's comment about the building in the lower right were both things that I was also bothered by. Nice to have a reality check on those two items.

A couple of people suggested painting the sky. Oh, if only something that easy would make me like it better. Sorry. I think painting one section would really be incongruous and this just does not want to be a painted quilt. I am using all my over dyed shirting fabrics in this and it needs to be consistent about that part.

So—in case you are still interested—here's what I did today, and I will try to tell you why. Keep in mind I made this up as I went along.

Nothing was going to make me happy with that pale yellow strip of sky. I wanted to like it. I tried. Up close it is a nice yellow and white woven stripe. Back up a couple of feet and it is a wimpy, bland pale yellow that has no energy in it at all. It not only lacks its own energy it seems to kill the whole piece, in my opinion. It had to go, and don't think I didn't think about painting it, but knew that was not going to be an acceptable solution. So I started by picking out all the quilting. I knew if I just put a new piece over the pale yellow and quilted over the old quilting it would make it very stiff in that area and probably distort the whole strip. So I spent much of yesterday and some of today picking all the stitching out. You can see that it poofed up, once the quilting was gone. 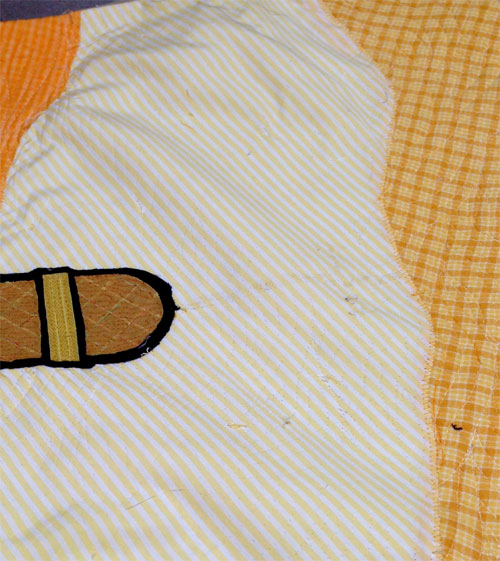 I carefully basted the new fabric over the old, knowing that the poofiness had to be there so that quilting would draw it up to equal all the quilted areas around it. 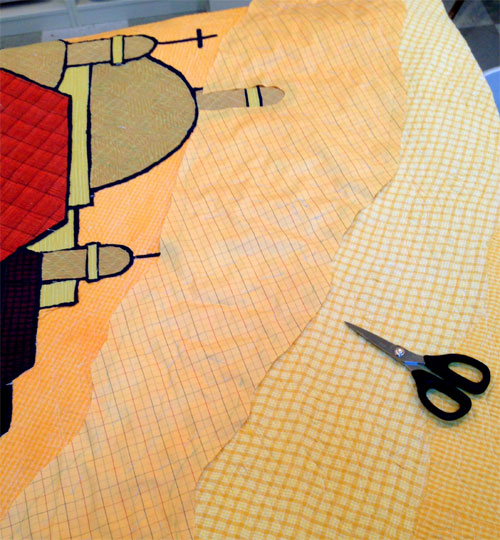 I basted with light blue thread so I could easily see the basting to remove later. I started quilting down the center area of the strip and worked my way out toward the edges, stopping just inside those edges. Side note: the basting was a problem. I kept snagging my quilting foot on the big basting stitches. In the future I will make the basting stitches smaller. Or better yet, not ever do this again! 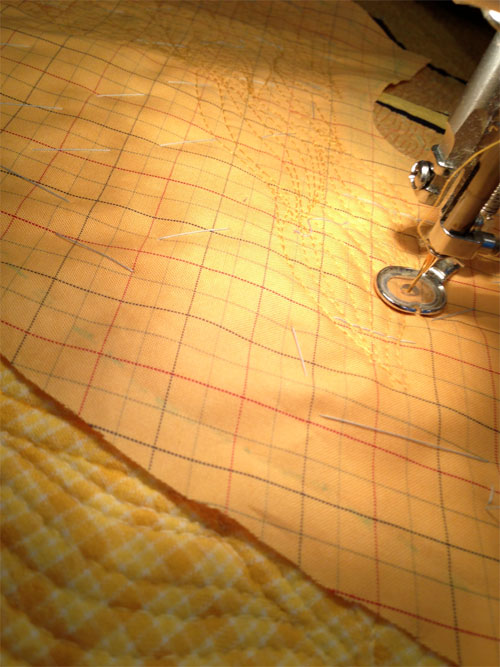 By the way, I cut the strip about a half inch wider on each side than it needed to be just to be safe. Who knew what might happen once I started quilting? Once I got the majority of the piece quilted, I trimmed the edges to line up with the adjoining edges and fused them down, then stitched the edges down. It all worked out quite nicely. 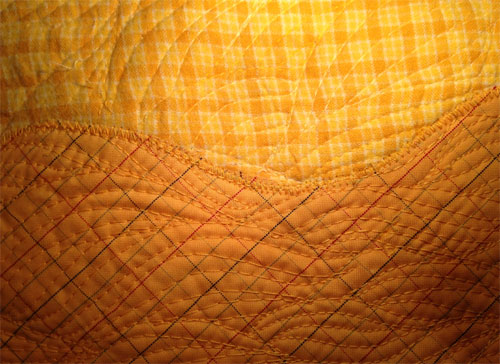 I filled in the quilting pattern up to the stitched edges and I am very pleased with the result. I think it looks like it was always there. The quilting drew it in and flattened it out to conform with the rest of the quilt.

This was the hard part and I am quite happy with it. Tomorrow I will assess what else I want to do with it.
Posted by Terry Grant at 12:18 AM