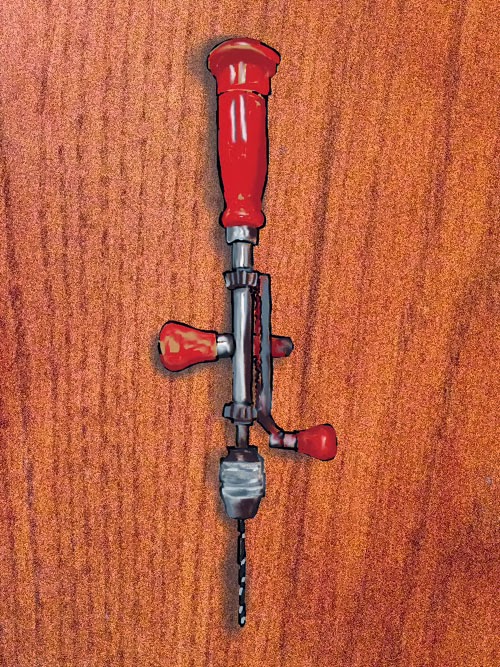 My very own hand drill
It was hard to pick a favorite tool if I was thinking of usefulness, but when I thought of graphic appeal it had to be my hand drill. I bought this at a yard sale several years ago and keep it in my studio for drilling holes in hanging bars. Ray thinks it is crazy to use such a clunky old tool. He says, " but, but—why aren't you using my wonderfully handy electric drill?" And I say because I would have to go find it and find the right size bit and then put it away after I use it, and besides I really just love this jazzy little egg beater-y little hand drill with its chipped red paint. I decided the only way to get all the little pieces and parts right was to start with a photo for proportion and placement. Then it seemed a photo of wood grain with some noise added would be the perfect background. 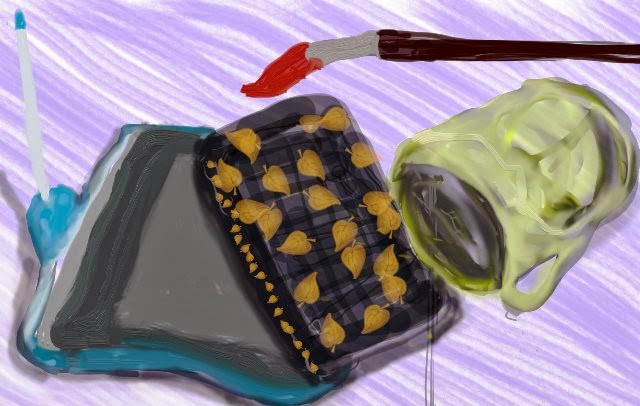 Favorite Tools. two images
This was one of those sighing assignments, and I assigned it myself. Image 1 was where I bit off more than I could chew, let alone digest. In image one, I depicted my old wacom tablet (alas, just yesterday replaced by a cold sterile version), a gold-decorated sketchbook, a turned over cup, and a paintbrush. Also an artifact that couldn't be discarded because I put it on the wrong layer. Disgusted with the image but feeling that sketching that much stuff was toooooo hard, in Image 2, I focused on the wacom tablet alone. That too was harder than I thought it could be. Image 2 also suffers from a moment when I said, oh the H... with it; I'll do a better tomorrow. Alas, tomorrow has come and I
haven't. So here it is. 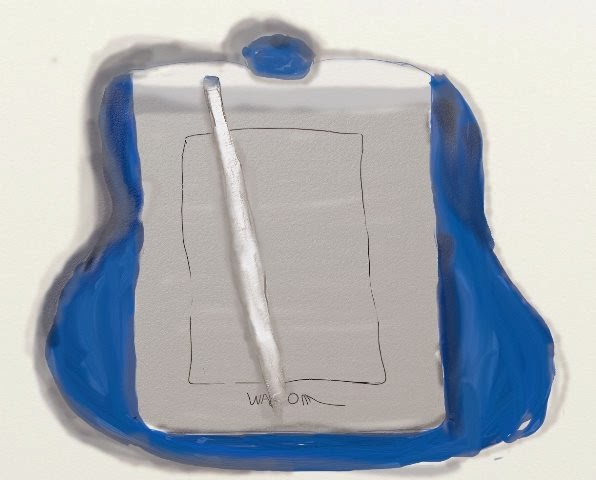 Let's see. I learned the joys and sorrows of layers. I focused and am focusing on still-life set-up (harder than one imagines), and the pitfall of thinking Photoshop will fix all. Still to come, working on the tablet alone (so I can go to coffee shops with discretion), learning the good, the bad, and the ugly of various digital programs (none seems to have it all) and, gasp, thinking next week I'll try out a borrowed iPad. I still haven't turned the last on yet.

The startling new thing I learned: the subtleties of perspective when one looks down at a close, yet not completely centered, image, as in #2. The far side looks bigger than the near side, although the near side has more detail and shadowing than the far side. It's a Hockney revelation in miniature. I found it more revelatory in the image I never finished (the one about which I said "the h... with it.")

#1 Samsung Note 10.1 tablet, New Trent Arcadia stylus, Photoshop 6, mouse as stylus. And with #2 all the above, except something weird happened in PS so I discarded it.  My new cool wacom stylus/tablet has arrived so next week I'm back in control. Maybe.

Next week's challenge: Table and what is on it
Posted by Terry Grant at 10:42 PM