A closer look at that St. Thomas quilt 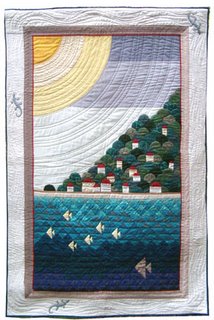 After I posted the picture of my "Red Roofs of Charlotte Amalie" quilt yesterday I realized what a bad picture it is and I really wanted to show it better. I just re-photo'ed it with the digital camera and you can see it here. The other picture was on my very out of date web site and it was pre-digital camera. It was a photo that I scanned and thought quite acceptable at the time. Such primitive technology!

It has been fourteen years since I made that quilt, but I still remember how much fun I had making it. There are a couple of quilt-y puns incorporated. The island is pieced in the traditional clamshell pattern and the water is pieced from half-square triangles as they are used in the ocean waves pattern. Get it?—clamshells and ocean waves? The border is constructed to look like a window frame with geckos crawling on the wall. And the blue in the water is shaded from turquoise to deep blue just as the Caribbean looks around the island.

Here are a couple of details. 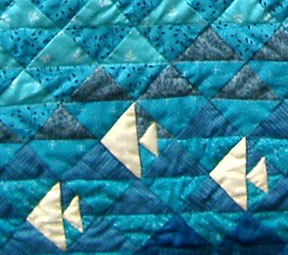 Everything was pieced, except the buildings, which were hand appliqued over the pieced background. This was either before I discovered fusing or before I thought fusing was acceptable! The little triangle fishes, however, look remarkably like the little yellow fish that we saw while snorkeling. 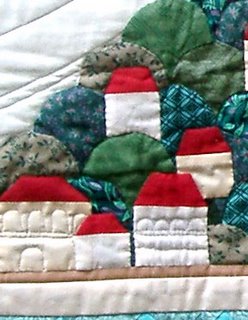 I thought I was quite clever to quilt the arched windows into some of the buildings. The red roofs were made from several different shades of red, just as the real red roofs of Charlotte Amalie are varying shades of red.

I entered this quilt in a show in Montana and won a cash prize—the first I ever won for a quilt. It hung in Ray's office at Portland Community College for years and I got a lot of compliments on it.

Thanks for indulging this little trip down memory lane.
Posted by Terry Grant at 12:46 PM