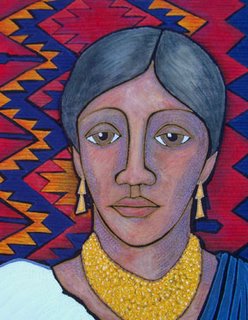 I have shown this piece in various stages including here and here. Progress has been slow simply because I have been sidetracked by other things. I have been quilting on it, however, and have finished the background and started on the figure.

I have lain awake thinking about how to go about quilting the face. I have seen other quilted faces that I didn't like and not too many I have liked, so I am making this up. I do not want a lot of quilting lines in her face, but I felt it needed some quilting and that quilting in the areas that recede would even help to define the contours of the face. I finally chose to use the quilting almost like shading with a pencil. I chose a dull purple color for that part. It may be too purple. I haven't decided. From a distance the purple is good—adds a little life to the shadows. Up close it is a little disconcertingly purple. But that seems to work for the Impressionists so I am withholding judgement until it is more finished. (I think I can tone the purple down somewhat with some transparent paint or pastels, so I won't be picking out all that quilting!)

Here's a closeup of the quilting on the face. 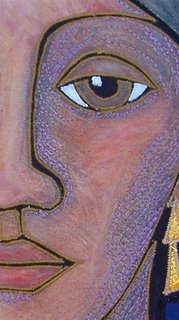 I was interested to read Melody Johnson's comments on working from drawings and designing quilts as opposed to working spontaneously. (February 3 entry) This piece was obviously carefully designed before I began, but there are still plenty of surprises and decisions to be made all along the way.

If you would like to see photos of the weaving and people of Otavalo, Ecuador, that inspired this piece, check out the current entries on our Ecuador blog www.noqinecuador.blogspot.com.
Posted by Terry Grant at 4:31 PM