Who are all these people? 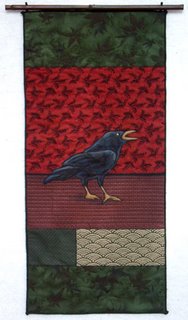 I'm slightly stunned. Yesterday 340 people looked at my blog. Cool. That's waaaaay more than my average of about 60 a day.

I think most were looking at my tutorial on my fusing method. After someone asked about it on the Quiltart list I posted a link again. But it is looking like some of those visitors are coming from Yahoo groups or other mail groups. Did someone repost the information elsewhere? Fine with me, but I am curious. Of those 340 people only about 4 left comments. I wish some of them would let me know how they found me.

And if you were wondering what I did with the crow I was fusing in the demo, here is the finished piece. It will be for sale at the Portland Japanese Garden sale in July.

Yesterday Gerrie and June and I went to see the Art Train. I was hoping to have some pictures to show, but they did not allow photos. The exhibit was called "Native Views - Influences of Modern Culture". It was all work by contemporary Native American artists and it was quite a well-done exhibit with some very nice work. We were all especially impressed with how well the accompanying statements were done. The train is a little claustrophopic, (this from a person who hates tunnels and enclosed spaces, but June agreed) but the exhibit is worth seeing. If the Art Train comes to your city, I recommend it. There's a schedule on the web site.
Posted by Terry Grant at 12:58 PM