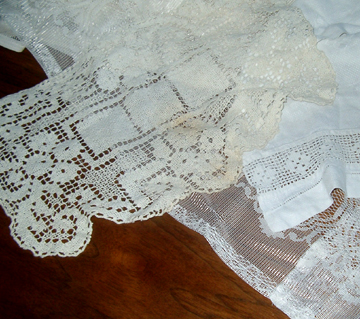 Kristin, you may be a genious! (See Kristin's suggestion in yesterday's comments) I love the idea of using some old linens to tie all the background pieces together. I went out on an expedition this afternoon to find some. I expected Goodwill to be a source, but all I found there was the lace curtain, which I think is much too new and shiny. But I found the other two pieces, quite inexpensively because they are worn and stained, (perfect!) at an antique shop. Now I need to see if I can make them work.

Interestly, the idea of these old linens triggered a memory of staying at a pension in Berlin in 1972. Frau Nickel, the owner, was an elderly woman who had been in her house, overlooking a park in the center of then, West Berlin, since before the first World War. The once quite grand house was quite shabby by the time we stayed there. Her battered grand piano sat on stacks of bricks because, she told us, they had had to burn the massive legs toward the end of the war (WWII) to stay warm. She told us she had hidden two Jewish sisters during the war. I was, and am, skeptical of the story, but she did have a "secret" room, which she showed us, accessible only through a small door hidden behind a bookcase. We slept on lumpy mattresses and I was amazed by the bed linens, which were elaborately embroidered and trimmed with handmade lace, by then quite threadbare. The sheets were so worn as to be nearly transparent and patched so many times that there were literally patches on the patches, but the amount and the quality of the handwork on them was stunning.
Frau Nickel was a fascinating character, quite eager to tell us how hard her life had been. She said that food was so scarce in Berlin before the end of the war that the animals in the zoo were butchered and the meat distributed to the residents of Berlin. From her window, she pointed out the grave, in the park across the street, of the first Russian soldier killed in Berlin. She said she saw people walk past and spit on the grave, but said she never would because, "I thought how it would hurt his mother."
Posted by Terry Grant at 3:46 PM