Today would have been my Mom's 84th birthday. Rather than being sad, it is a good day to remember what a great Mom and wonderful person and funny lady she was. I remember, very clearly, her 30th birthday. I was nine years old.

I bounded out of bed, eager to celebrate Mom's "big" birthday. I could hardly wait to give her the present that Dad, Becky and I had carefully chosen, but she was nowhere to be seen as I wandered out into the livingroom. Dad was reading the paper and put a finger to his lips and said, "don't wake your Mom. She had kind of a bad night last night."

It was a hot, still night, much like it was here in Portland last night. Mom, quite pregnant and uncomfortable could not sleep. She stepped out onto the front porch to see if she could catch a cool breeze and saw that the neighbors' lights were on and decided to see if her friend, Alice, next door, had a book or magazine she could borrow. Walking through the grass, she stepped in a hole, fell and broke her ankle. While Becky and I slept, under Alice's watchful eye, Mom and Dad drove to the emergency room and came back, several hours later, with a big, awkward plaster cast on Mom's foot and ankle. Becky and I slept through the whole adventure. When Mom finally got up that morning, she gave us a wan smile and spent most of her birthday resting on the sofa, with a fan pointed at her. Soon enough she was up and around and hauling her pregnant self, plus heavy cast, around on crutches. She said she served the useful purpose of making everyone who saw her feel better about their own lives! She got a lot of sympathetic looks and women, especially, would roll their eyes and groan in sympathy when she went out in public. I do remember though, that she allowed no pictures taken!

Three months later my brother, Steve, was born—with a crazy bad fear of falling. Even as an infant, if you picked him up, out of his bed, he would claw at the air, gasping, with a look of terror on his tiny face. To this day he has a hard time climbing a ladder, boarding an airplane, and I don't think he has ever ridden a ferris wheel. 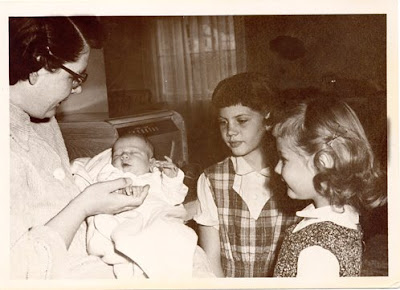 Happy Birthday, Mom! Wish you were here—but you wouldn't like the heat.