When we were in Pocatello several weeks ago we went out to the Fort Hall Indian Reservation one afternoon, mostly to check out the casino, which was built long after we moved from the area. As casinos go it is pretty modest. There are no table games, no restaurant or lounge, only machines and Bingo, but I managed to come out about $6 poorer anyway. 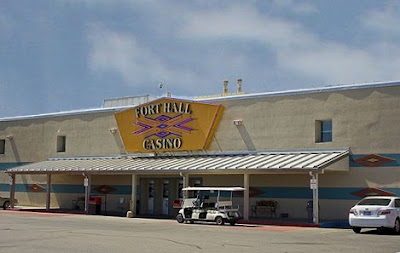 The Fort Hall Indian Reservation is between Pocatello and the town of Blackfoot, Idaho. While it was quite close to Pocatello, it was not a place I was ever very familiar with, other than what you see from the freeway that runs through it. It was named for the historic Fort Hall on the Oregon Trail. The fort was not a military fort, but rather a trading fort and was owned by the British Hudson's Bay Company. The land was established as a reservation for the Bannock and the Shoshone tribes in the late 1800s. The view from the freeway is of desolate, sagebrush covered hills, but much of the reservation is actually rich farmland and there are also phosphate mines, that produced phosphate for fertilizer for many, many years.

When we were kids you still saw teepees on the reservation and many of the Indians (which is what we called them then—"native American" was not a term anyone had heard of yet) who we saw shopping in town still dressed in the old styles and men and women both wore their hair in long braids. Nowadays they dress in Levis and western shirts, just like everyone else and the houses you see from the freeway are just like the houses in town.

Our High School sports teams were known as the "Pocatello Indians," supposedly in honor of our association with the reservation. In recent years there have been requests from the tribes, who feel that this is demeaning, that this be changed, but to date it has not. I remember feeling uncomfortable about that name, even as a student. As someone once pointed out, "would a school ever call themselves the Springfield Caucasians or the Lake City Hispanics?" Of course not.

The one place on the reservation that I was familiar with was the trading post, which looks pretty much the same today as it did 40 years ago. It became popular when I was in High School to go out to the trading post to buy moccasins. Beadwork on buckskin has always been a native art that the Bannock-Shoshone tribes have excelled in. When we bought them, you could get a handmade pair, with a small beaded design for less than $10. If you wanted more beading the price went up. We wore them with our jeans. They were soft and comfortable, almost like wearing slippers and as you wore them, they conformed to the shape of your foot. They are still selling them at the trading post, along with all kinds of beaded purses and jewelry and accessories like belt buckles. The price has gone up—a lot! The kind of simple moccasins we used to buy are now selling for $75, which still seems pretty inexpensive considering the time that must go into a pair. 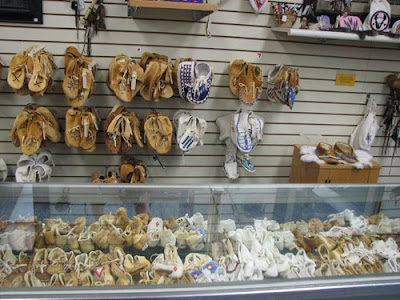 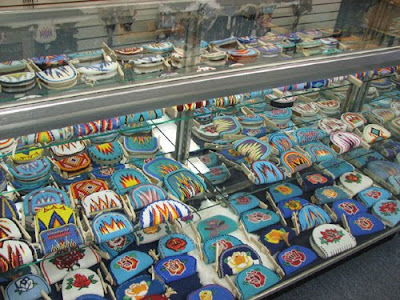 I saved the last pair of moccasins I bought years ago. They are pretty well-worn and missing the ties, but I knew I would probably never have another pair. 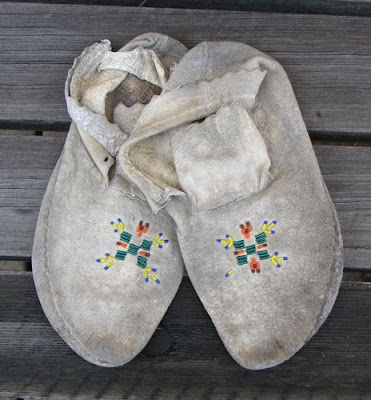 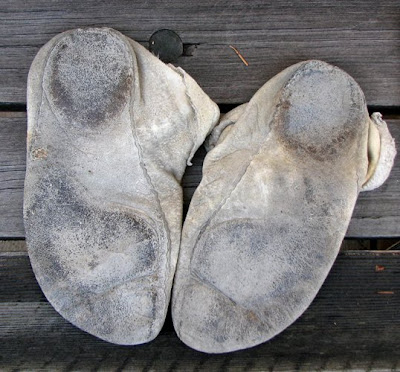 You can see the imprint of my feet, even toes, if you look carefully, on the bottoms.

I wonder what the future of Indian reservations will be. This one didn't look very prosperous, but it never did. I had a lot of classmates in High School, who lived on the reservation. I didn't see any of them at the reunion. When I looked at the class lists with current addresses, it looks like most have moved away.