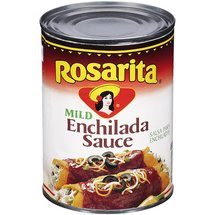 Many, many years ago when I graduated from college, I moved to the big city. I left my home and family in Pocatello, Idaho and headed for the hustle and bustle and bright lights of Boise! (OK, laugh if you will, but it is the biggest city in the state of Idaho.)  I got a job and I got an apartment where I lived by myself for the first time in my life. I missed my family and I really missed my mother's cooking. Mom was an outstanding cook and having grown up in the Southwest, her specialties were Mexican or Tex-Mex dishes. Oh, those enchiladas! Mom usually made everything from scratch, including the sauces and it was a big production. Cooking for myself after a hard day at work was whatever I could make quickly. An early discovery was canned, Rosarita brand enchilada sauce. It tasted almost as good as Mom's. Now there are a lot of canned enchilada sauces, and I have tried them all, but, trust me, Rosarita's is the best. Rich and earthy, spicy but not too hot and more chile flavor than tomato. I could build myself a tasty stacked enchilada for dinner in no time. A little omelet, smothered in some Rosarita and sprinkled with cheese and green onions. A toasted cheese sandwich dipped in Rosarita. I considered Rosarita sauce my main staple.

Years went by and my cooking repertoire expanded and I lost touch with Rosarita for quite awhile. I looked for her in the stores, but never saw her. I assumed, sadly, that Rosarita was no more. Then last year when we moved, I started shopping at a different store and there, in the ethnic foods section I found my old friend Rosarita! We are BFFs again. And I have been remembering just how versatile this can of sauce is. It's not just for enchiladas! 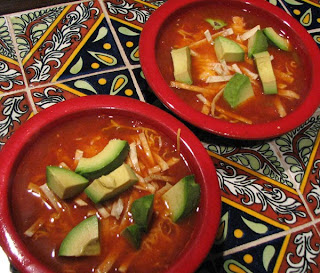 Tonight I made a delicious and quick-to-fix tortilla soup, with Rosarita's help. It was so good, really! Here's how I did it. Took less than an hour. Amounts are sort of variable. I was making it up as I went along.
While all that simmered, I sliced 5 fresh corn tortillas into strips (about 1/4"). Sprayed a cookie sheet with vegetable oil and spread the tortilla strips on it. These went into the oven with the chicken.
Ladled hot soup into bowls and garnished with shredded cheese, avocado chunks and the tortilla strips.
I know this sounds like a lot of cans of stuff, which is not the way I usually cook, but it is so fast and so tasty! Today I wanted to spend more time in my studio than the kitchen so it was perfect. I love a good tortilla soup. I'm not a fan of corn and rice and a bunch of stuff in my tortilla soup, but you could add whatever sounds good to you. If I'd had some cilantro I'd have sprinkled some of it on top. A squeeze of lime juice is also good if you have it.
There you go. I have broken those sacred blogging rules by not only telling you what I ate for dinner, but giving you the recipe.
Posted by Terry Grant at 11:09 PM