Periodically I like to look back at my blog and see what I was doing a year ago, 2, 3 years ago. It was two years ago that we began our serious remodeling of this house. It was a really stressful, but also exciting time.

We had originally planned to buy a lot and build our retirement house, near Portland, but not right in Portland. We became very discouraged by the lots we found. Most were very small, with no trees and extremely expensive. One day, after looking at three lots—one on a busy main street with no trees on it, one on a flag lot behind an old run-down house and one so narrow and deep we'd have had to build a New Orleans style "shotgun" cottage, I finally said to Ray, "Let's start looking for an existing house, with possibilities, on a great lot."

I started researching houses on the internet and found this one, just five minutes from our daughter and family, and with a nice, deep wooded lot. It even has a creek running through. It didn't take us long to decide that we could make something of the house and we bought it. We ended up working on it for nearly a year before we moved in. In that year the economy took it's swan dive and we found ourselves with an old house and a new (old) house that were both worth much less than when we had started this adventure. That is when the stress kicked in, but we forged ahead and did what we could do.


It seemed that Ray and I, alone, could see the possibilities in the house. My daughter has admitted her original skepticism and I know friends were just being polite when they said things like, "it has possibilities." Looking back on my "before" pictures makes me realize just how much we accomplished on a reduced budget and less than a year's time. Here is the living room before we started work on it. 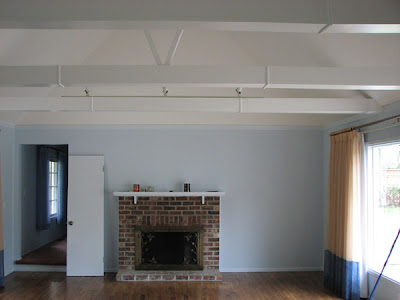 And after, taken today. 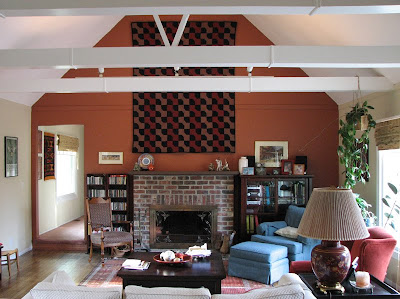 Another view before, with previous owners' furniture. 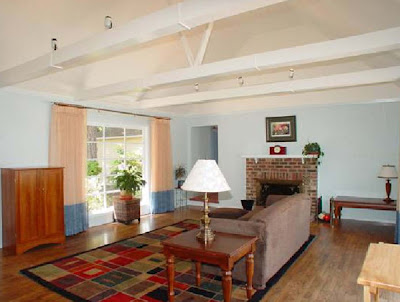 And after with our furniture, taken today. 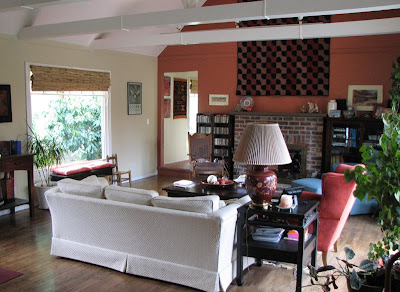 Most of the changes to this room were cosmetic—paint principally, but we replaced all the windows with energy-efficient double paned windows. The old windows were not bigger. The heavy drapes were hung to the sides of the windows, creating that illusion. When the old window was removed in the living room the carpenters discovered carpenter ants and a lot of damage done to the structure around that window. That was not a happy day, but it was all repaired and the ants exterminated. 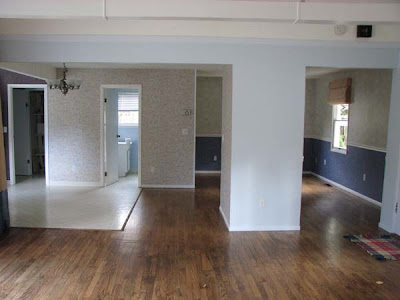 You can also see that the kitchen flooring, oddly, extended about halfway across that dining area.
Here's the after. 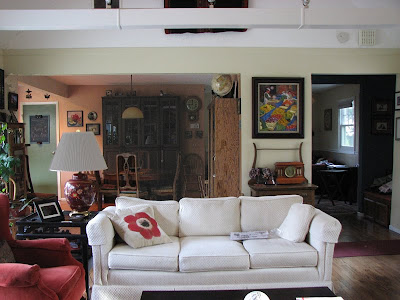 The bathroom door was relocated around the corner in the utility room and the wall repaired. The china cupboards are now where that door was. Not visible in this photo is the new kitchen and dining room floor that extends across the entire dining area.

More extensive changes were going on in the kitchen. We will look at them tomorrow.

P.S. All after pictures are clickable for closer views.