When I woke up this morning I felt bad about last night's blog entry and thought I should probably delete it. Then I saw how many people seemed to identify and commented to that effect. In addition to the comments left on the blog I got three private emails that said, essentially, "I can't comment on your blog because there are people who read your blog who will know that I am talking about them..." and went on to tell me about who was making them crazy in their own groups. So, OK! I'm not the only occasionally antisocial crab out there.

It would have been hard to be crabby today. The sun shone all day long and it was simply glorious. This is not the February I have grown accustomed to. We moved to Portland in February of 1993 and I did not see the sun once during that February. I was not happy to be here. This morning we walked in sunshine. We saw bunnies. Seriously! Bunnies. The pink monkeys, who are still there by the way, had gotten very soggy and bedraggled, but they were dry and perky-looking today. We still don't know the story and are kind of amazed that they have stayed there this long. I told Beth about last night's meeting and we found some humor in the whole thing today. What I left out of my meeting report last night was that we meet at a church and we sometimes get to meet in their very nice conference room, but because there was a big Shrove Tuesday event last night we had to meet in a little Sunday School room next to the bathroom in a different part of the building. The walls are thin and everytime someone used the adjoining bathroom our meeting was interrupted by a startlingly loud PAWHOOOOM! as the toilet flushed, followed by a deep, shuddering groan in the plumbing. At first we were alarmed, then bemused, then it got to be funny—something had to be. 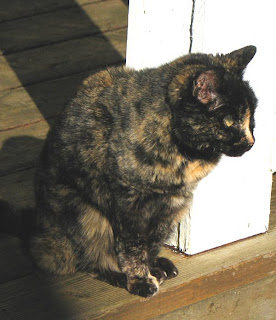 Gracie enjoyed the sun today, and even roused herself to follow me around the yard for awhile. I am wondering how much longer she will be with us. She seems to be shrinking. Ray, who feeds her, says she doesn't eat a lot these days. And she looks kind of hunched to me. She has survived many years longer than her brothers Oliver, who lived with us, and Prozac who was Andy's cat. Both Oliver and Prozac were much more beautiful, affectionate, intelligent and endearing cats than Grace, but she has grown on us. She loves to be outdoors and I expect winters are pretty long and boring for her. I'm glad she has had some sunshine to enjoy.
Posted by Terry Grant at 12:19 AM