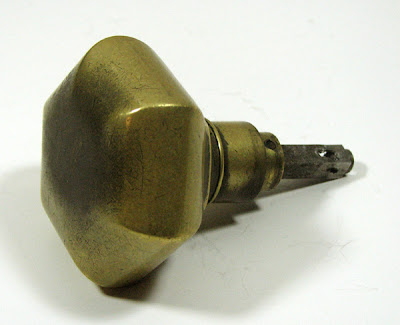 A couple of months ago our renters called to say that the door knob on the front door was broken. You may remember that when we moved a couple of years ago we were unable to sell our 1914 house. We have had it rented to four lovely young women since then. Anyway, the doorknob was "broken," whatever that meant. Worn out was what it meant, pretty much. You may be able to see that the hole through the square shaft has become far larger than it should be, through wear. There were other issues that I didn't thoroughly understand, but the bottom line was that it was not usable.

Now I can't say I was happy about this, but you know what? In some perverse way I was. I was happy that the door knob was broken. That doorknob has been there for 96 years. Every person who has lived in that house touched it, used it, probably every day that they lived there. I did. That piece of hardware feels so familiar in my hand that it is like a part of me. And the house that it represents will always be a part of me.

When we were looking for a house in Portland, we found one we loved and made an offer. Unfortunately another offer had come in just ahead of ours. It killled me. I don't know about you, but when I find a house that is right I claim it immediately. I know just where all my furniture will fit before the papers are even signed. I picture myself waking up in the morning and walking through the house to the kitchen and know that this is my place. So having that snatched away takes some readjusting and grieving before I can move on. We kept looking and found another great house and the same thing happened! Now I was really discouraged. Time went by and we looked at a few uninspiring houses, then one day the realtor called and said, "I saw a house today and thought about you. It doesn't have all the features you want, but somehow I think you just might like it." When we drove up in front of the house, before we even went inside, I knew it was our house.

We lived there for 17 years—longer than I have lived in any other house in my life. It really was the house I had always wanted. Not fancy. Not modern. But it had charm and it had history. It was a house people returned to. I met a man who grew up there. He was in Portland for a family reunion and drove by with his grandchildren to show them where he had grown up. I invited them to come inside and he told me a lot of stories about the house and how he had helped his Dad build the garage. Two years ago when it was for sale a woman who had lived there in the '80s nearly bought it from us. She came to see it twice. Her children are grown and she was divorcing. She said the happiest part of her life had been spent in that house. In the end she concluded it did not make sense for her to buy it for many of the same reasons we wanted to sell it. Lots of maintenance on old houses. Lots of stairs. More room than we needed. As much as I loved that house I was happy to leave and still hope to sell it soon to a family that will love it as all its previous owners surely have. And now I am happy to have a small souvenir of my time there. Think how many hands have grasped that door knob.
Posted by Terry Grant at 10:38 AM