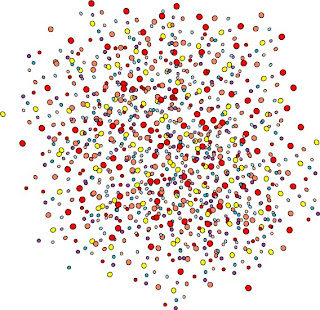 There are a thousand dots in my illustration. That is how many posts I have written on this blog as of today. 1000. It blows my mind. It has been nearly 5 years that I have been doing this, so that averages out at about 200 per year. I know a lot of bloggers write every single day. Some more than once a day, so my thousand isn't that big a deal in general terms, but it is a big deal to me.

I have been trying to think of something special to write or do or show to mark this thousandth post and I haven't been able to come up with anything. Some of the posts have been carefully written, some just photos, some silly somethings gleaned from the internet. Some I remember writing and knowing that I had learned something from myself, but mostly it has been a day to day kind of journal. Of these thousand posts, can I think of a favorite? Maybe. There was one I wrote in response to a post my fellow Twelve, Kirsten wrote. It was a writing exercise that comes from a poem by George Ella Lyons. I wrote this in February of 2008. That was almost halfway from the beginning to this point. It still expresses my feelings, so I am reprinting here.


I am from The Saturday Evening Post, from Grapenuts and the Postwar Baby Boom.

I am from singing in the car and laughing til we peed our pants, from Grandpa Ern ("you be Frank and I'll be Ernest") and Shelton earlobes and Howard hair.

I am from handmade is better than store bought.
From "never tolerate intolerance" and "life is grand if you don't weaken."
I am from the little Methodist church and the Carnegie Library and the Woolworth and the Okay Market.

I'm from a homestead in Colorado, a farm in Montana, the foot of the mountains in Idaho, from baked potatoes and cheese enchiladas.

From Jimmy who saw Betty for the first time and said, "There's the girl I'm going to marry" and Betty who thought she "might die" if she didn't marry him; and black and white TV and a succession of Ford Station wagons.

I am from Dad's darkroom and family photos and silver dollars. From fresh trout and starry nights, the smell of woodsmoke and wool blankets; the love of books and babies and card games and road trips and a good story.

I am from love that was demonstrated daily but never talked about. I am from family.

My thanks to those of you who read and comment. I never realized that it would be so great to have this connection.
Posted by Terry Grant at 4:14 PM