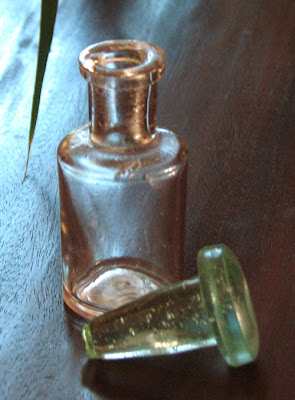 My grandmother Hazle collected old bottles. She especially loved old medicine bottles that she found out in the desert or along stream banks or in the trash piles in deserted ghost towns. Some were the old kind that had turned purple in the sun. She usually wasn't looking for bottles when she found them. She was looking for gold. Grandma Hazle (that's the way she spelled her name) always carried a gold pan and a pick in the trunk of her car. She lived in gold country—Southern Oregon, on the California border—and she knew the history. And she knew there was more gold out there. And she knew that she was going to find it.

She was born in Condon, Oregon. Her mother had come to Oregon as a girl in the great migration, in a wagon on the Oregon Trail. Her father had come, with his brother, from France when they were orphaned children. They sailed on a ship, round the tip of South America, and landed in San Francisco to live with their spinster aunt. My great grandfather, as a young man, traveled to Oregon to homestead and meet his future wife. Years later, his brother disappeared in the San Francisco earthquake of 1906. Grandma Hazle was closer to her father than her mother and spent her childhood helping with farm chores and following her father around. A tomboy with a sense of adventure.

Hazle's first husband died from drinking tainted water, just a few months before their first child (my Uncle Bill) was born. She took her newborn baby to Seattle, knowing she would have to find a way to support him by herself and sought out an agency that placed domestic help. The woman who interviewed her was so impressed by her determination, and probably her desperate situation, that she hired her to be her own housekeeper and gave her the key to her home and sent her off to settle herself and her baby directly from the interview. Hazle never forgot this kindness and the trust she was given. My aunt Clio was named for this kind employer who became Grandma's closest friend. She soon met and then married my grandfather, Ernest. They had four more children, including my father, and endured the Great Depression, eking out a living in Montana and Wyoming, where Grandpa worked as a cowhand, a timber cutter and a deputy U.S. marshal. Eventually they found their way back to Oregon, where I visited them in the summers as a child.

After Grandpa died, Hazle, then in her '70s, married again. We all enjoyed her irrascible and opinionated husband, O.Z., even if he grumbled and complained about the state of the world and "young people". His heart softened the minute Grandma walked into the room. He adored her.

She outlived three husbands. On her 99th birthday she was still talking about finding that big vein of gold somewhere "out there in the Applegate." Over her many years of looking she did find gold. She had a small medicine bottle about half full of flakes and tiny nuggets, but she never found the big vein she was looking for. Toward the end, when she was very ill, I arrived at the hospital to visit and she awoke, smiling. She said she had just spent the morning riding horses through the mountains with her Papa. She said she had seen her mother, too, and had cried with happiness to see her again. She died just a couple months short of her 100th birthday and we all hoped she arrived in heaven with her gold pan under her arm. Each of her children and grandchildren and great grandchildren took one or two of the bottles, that lined the windowsills of her house. I also took the green glass bottle stopper, etched by time and probably sand and dust.

On her 100th birthday her family gathered in Ashland where she lived. We had a party and shared our memories and funny Hazle stories (there are many) and took turns taking our pictures sitting on the bench in Lithia Park that we purchased in her memory. If you go to Ashland, you can sit on her bench and watch the swans in the pond. She would like that. 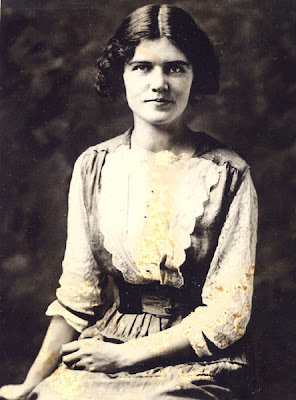