I was in the kitchen this afternoon making bread and finishing up my rum balls and listening to the radio as I worked. There was a story on "The World" about a very strange Christmas tradition from Spain—an unusual figure that is part of their traditional manger scenes. I will let you go to their web site to get the whole story. It reminded me of the manger scenes we saw in Ecuador and I seemed to remember that I had taken a photo of at least one of them. 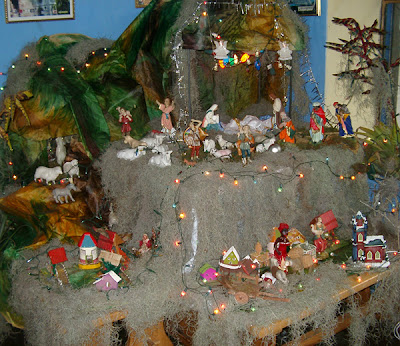 You can click on this picture to see details better.

We went to Ecuador for Christmas in 2005 the year our daughter was married and still living there. It was really a memorable Christmas and I put together a blog just about that trip that you can see here. But, back to the manger scenes—

It seems that every home and many businesses have one. This is not the small creche that you often see here, but often very large and elaborate setups. The one above was in a bakery. My son-in-law's family had a very elaborate one, that I guess I somehow failed to photograph. They are generally set up on a table and sometimes extend over several tables, which are first covered with moss. Then the basic ensemble of Mary, Joseph, Baby Jesus, Angel, Shepards and Wise Men take center stage.  Then, it seems, the family begins to collect more and more figures and props to add over the years. They often include hundreds of figures. More shepards, more angels for sure, but all kinds of small animals, including lions and bears and rabbits, and figures including such luminaries as Mickey Mouse, the Pope, Elvis, Darth Vader, Betty Boop, dollhouse figures, china figurines and whatever. They are pretty amazing! I do not recall seeing a figure like the one described in the radio story. I think Ecuadorans would be appalled by such a thing!

My little scene is from Ecuador, but nothing like the big ones seen in homes there. I think it is very sweet because the figures are clearly natives of Ecuador. You can tell by their clothing. And furthermore, Mary and Joseph are each wearing, and weaving, a Panama hat, the most famous products of the city of Cuenca where my son-in-law's family resides. 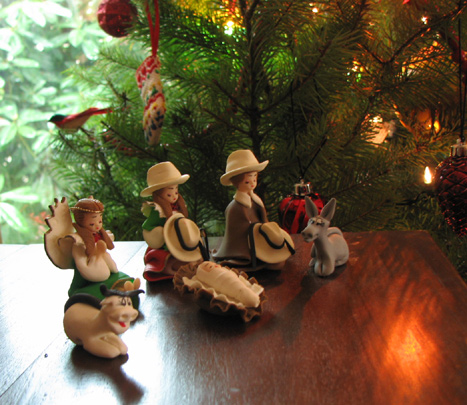 We are going to my daughter's house tonight for a Colombian soup that is a traditional Christmas dish in South America. I hope if you are celebrating, it is with family, or those you love. Merry Christmas!
Posted by Terry Grant at 4:43 PM