Tales from the Yard Sale 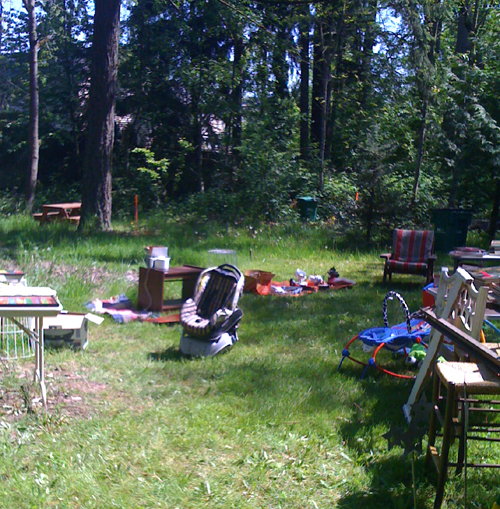 It seemed like a good idea a month ago when one of our neighbors stopped by the house and said he was organizing a neighborhood yard sale. "Sure" we said, "we'll participate." When Friday morning rolled around, the date of the yard sale, I did not have much organized for the sale, but we hauled what we had out to the front of the yard, near the road. Ray, it seemed, had scheduled (ahem) some meetings that day, so it fell to me to man the yard sale. Since it was a beautiful day, it was nice to ensconce myself in a comfy chair (back, right side of the photo) and read the new Smithsonian magazine from cover to cover while I waited for customers. My next door neighbor wandered out and was my best customer of the day. She bought some baby things for her new granddaughter. Customers were few and far between. I entertained myself by posting yard sale updates to Facebook. I considered taking a nap under a tree. Then the guy showed up.

An older gentleman, smartly dressed in khakis, hiking boots, a snappy brimmed hat and one of those vests with all the zippered pockets wandered into the yard. He observed every item in my offering and said he was sorry I had nothing he was looking for. "What are you looking for?" I asked, more out of boredom than genuine curiosity. He said he was a regular vendor at the Vancouver (WA.) Flea Market and explained that his usual source of merchandise was the contents of abandoned storage units that he bought at auction, sight unseen, but he added to this with yard sale purchases. "I sell anything, unless it is illegal or immoral." He said he sometimes found pornography in his storage unit purchases, but refused to sell that.

"You must find some interesting stuff in storage units" I commented, thinking of the potential for disgusting or gross stuff. "Yikes, what if you found a dead body?" I was thinking.

Uncomfortable, and wondering about his liability, he called the police. They referred him to the FBI. He said the FBI did a little investigating and got back to him to tell him that the unit had been rented by a Pakistani who was in the country illegally and was bringing more illegal Pakistanis (terrorists??) into the country. When this Pakistani was discovered, he fled the country, leaving his stash in an abandoned storage unit in Beaverton, Oregon. The FBI agent told my storyteller that the cash was legally his, but warned that someone might be looking for it and could easily get his name from the auction records. My yard sale visitor told me his wife became convinced that they were going to be killed for this money and had a heart attack, which she narrowly survived. They sold their home and moved to an undisclosed location, still in fear for their lives—but here he was, perusing my yard sale, and continuing to stock his flea market table. I could see that he was checking out my reaction to his story, and he nodded, emphatically, a couple of times. "Enjoy the day..." he concluded, and wandered off up the street.

This story was the best thing I took away from my yard sale day. Sales were dismal. I took in less than $20. Do I believe the story? It doesn't matter, but for the record—maybe.
Posted by Terry Grant at 11:26 PM